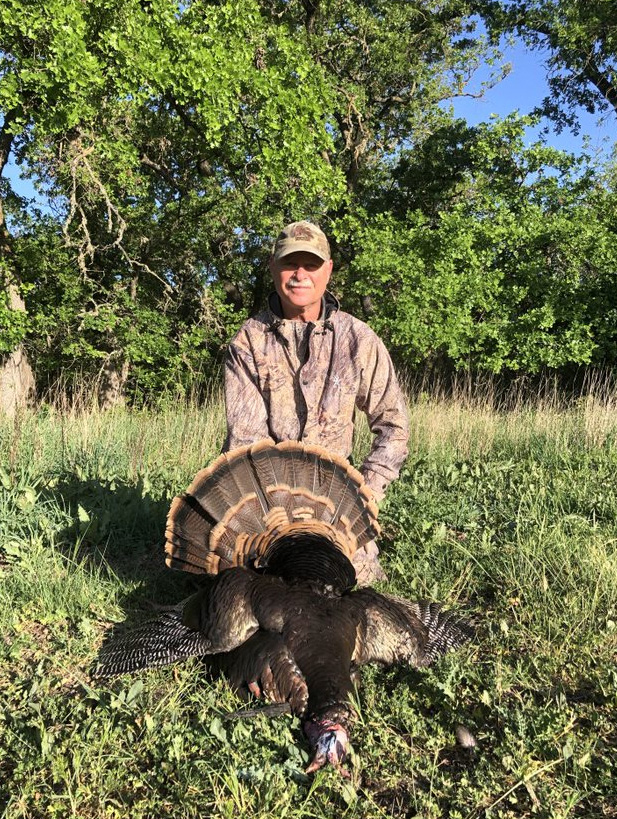 The distant sound of geese and ducks greeted the hunters as they slipped into their muck boots and unloaded the shotguns from the truck for the morning hunt at Hoodoo Island in the Upper Butte Basin.

They weren’t after ducks or geese - that would have to wait until the fall. But turkeys, now that was a different story.

Veteran John Dull hadn’t yet been on one of CWA’s Veteran Hunts and the excitement of the opportunity was hard to contain as his turkey guide for the day, Jeff Smith, led the way with a quiet “Let’s go.”

Jeff began the quick walk to the bottomlands where the turkeys were roosting. Jeff smiled, turned to John, and slowed the pace to more of a leisurely turkey trot. “Hey, some of us are getting up there!”

As they snuck into position, Jeff silently put out the turkey decoys, then put up the mesh tent that would be their ambush position for the day. Then came the second order of the day: “Get in the tent.”

All around them, the woods began coming to life with the sounds of the marsh welcoming the day. Then there it was, the shock gobble from the roost and the clucking of the hens as the roosted birds scanned their surroundings for signs of safety before taking wing.

The third order of the day was a welcome one. “Here they come,” Jeff whispered as three big toms strutted their way into the field. “Let them come in and aim for the head.”

John raised the gun to his shoulder. A shell full of Federal #4s waited for the tom, but he seemed just out of reach, and John wasn’t sure. A wayward hen grabbed the tom’s attention and pulled him decidedly out of range.

Disappointment hung in the tent like a dense fog. But Jeff brushed it off. “There are a lot of turkeys around. We will have another chance.”

An hour later, the most joyous words John could recall came out of Jeff’s mouth, what would be the final order of the day: “Here they come. GET READY.”

Seven jakes followed by a nice tom strutted into the opening, looking at their decoys. The Big Boy moved at an agonizingly slow pace, strutting, gobbling, and preparing for a fight.

When he slowed even more at 20 yards, John eased his gun into position, put the bead on the Big Tom’s head, and sent those Federal #4s downrange.

The shot found its mark. Big Boy lay flopping on the ground. John Dull had harvested his first CWA Veteran Hunt Turkey. The early disappointment and the tension of the final approach evaporated.

The walk back to the truck was a leisurely stroll, full of satisfaction and thankfulness for both the hunt and the opportunity to be part of the Veteran Hunt Program.

And there were those ducks and geese again. We’ll see them next fall.

Are you a veteran or active-duty service member? Come join us on one of our many veteran hunts or fishing trips! Learn more here, and if you’re interested in donating a hunt for either the Veteran Hunt Program or the Hunt Program for the general public, you can get started here.