Waterfowl of the World

Waterfowl of the World
Unparalleled in beauty and accomplishment
Story by Scott Haugen, photos by Gary Kramer (originally published in Fall 2021 issue of California Waterfowl) 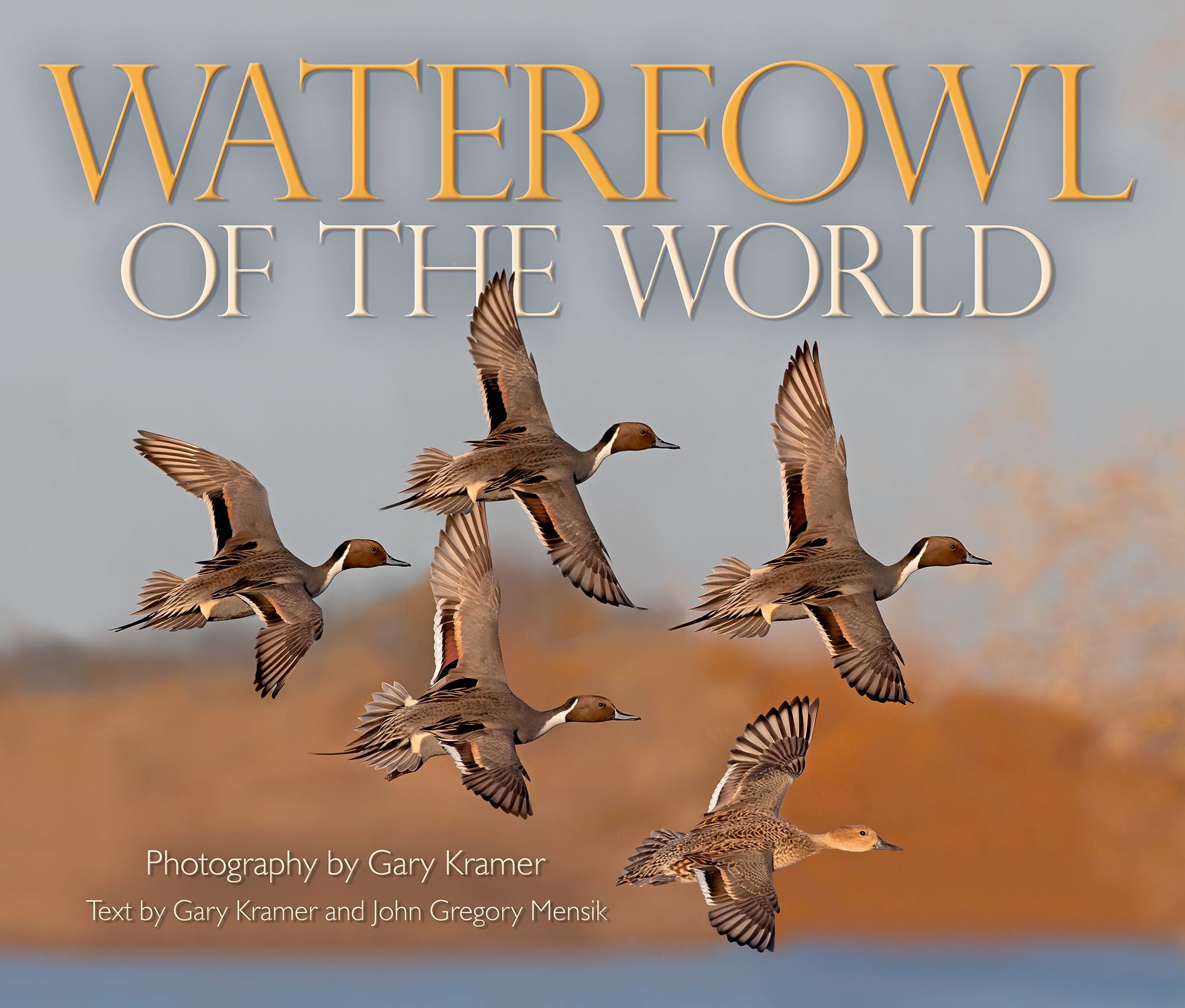 to pre-order your copy now! Book is expected to ship in November, just in time for the holidays.

"I think I just got the shot," Gary whispered as he scrolled through the images on his camera screen. We were lying side by side, photographing ducks at Colusa National Wildlife Refuge last winter.

“Of what, pintails?” I came back, smirking. As if Gary didn’t already have thousands of great pintail shots.

“Yep,” he said, ignoring my attitude. “I have lots of pintail images, but that was the perfect drake and hen shot for the book.”

“The book” is “Waterfowl of the World,” which goes on sale this fall, and “Gary” is Gary Kramer, an accomplished waterfowl photographer and biologist who has already published three books of incredible wildlife photography. But this book is his most stunning yet – an unparalleled feat. 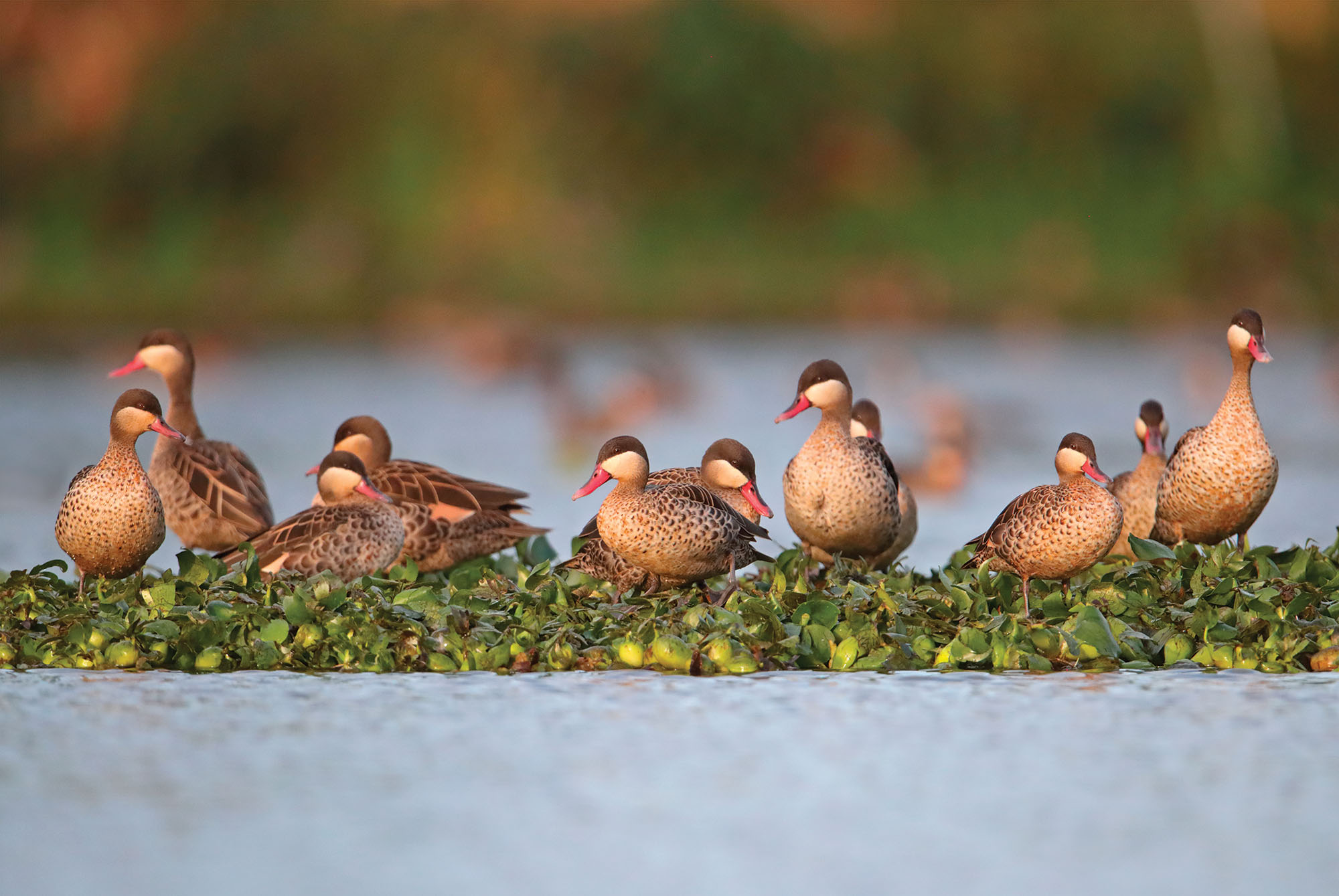 I’ve been a fan of Kramer’s work for decades. I love his photography and his drive for perfection in every shot he publishes.

Born and raised in California, Kramer’s passion for the outdoors took root at an early age. Kramer landed a job as a wildlife biologist for the U.S. Fish and Wildlife Service in California in the 1970s, and over the next 26 years, he worked on four national wildlife refuges, including a 10-year stint as manager of the Sacramento National Wildlife Refuge Complex. There he made unprecedented changes that helped attract the highest concentration of waterfowl on any U.S. refuge complex.

If you’ve driven through some of these refuges photographing ducks and geese, you know what Kramer did. Strategically placed logs and habitat, clever road designs for good morning and evening photography light, and bringing in gravel that allows birds to stand and gather grit are just some of the strides he made that benefited birds and waterfowl enthusiasts.

His accomplishments in both conservation and photography earned him a place in the California Waterfowler's Hall of Fame in 2011. 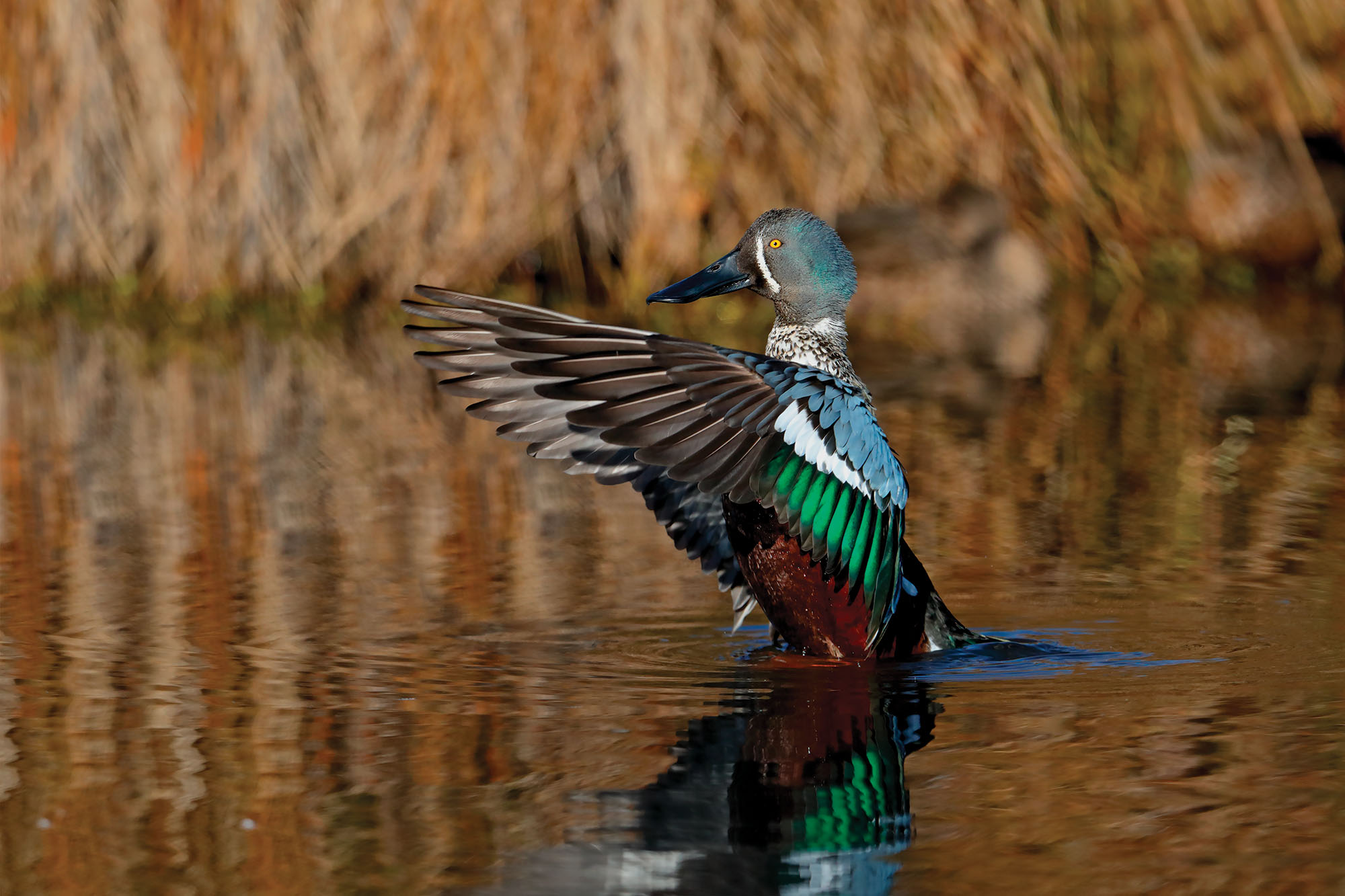 But Kramer’s latest undertaking could be his most spectacular of all, as he recently completed a nearly four-year journey to more than 40 countries where he photographed 165 of the world’s 167 waterfowl species. No one has ever accomplished this, let alone captured such stunning images as the ones highlighted in “Waterfowl of the World.”

Kramer has always been a stickler for composing shots with perfect lighting in natural habitats at angles that make viewers feel as if they are there. Kramer ventured into the native habitats of the most remote corners of the world to get the highest quality images possible for this project. Once home in Willows, when reviewing his work on a big screen, if he didn’t like what he saw, he would go back to get the perfect shot. He did this multiple times.

“Waterfowl of the World” is a once-in-a-lifetime work, not just for one man, but likely for anyone, given the staggering challenges he encountered. I doubt his feat will ever be equaled, let alone surpassed.

The photos alone are worth the price of this beautiful book. But take into account the informative text, maps and adventure stories – co-written by fellow Waterfowler’s Hall of Fame member Greg Mensik – and what you have is an essential and enduring treasure for the coffee table of any waterfowl aficionado, not to mention California’s hundreds of venerable duck clubs. 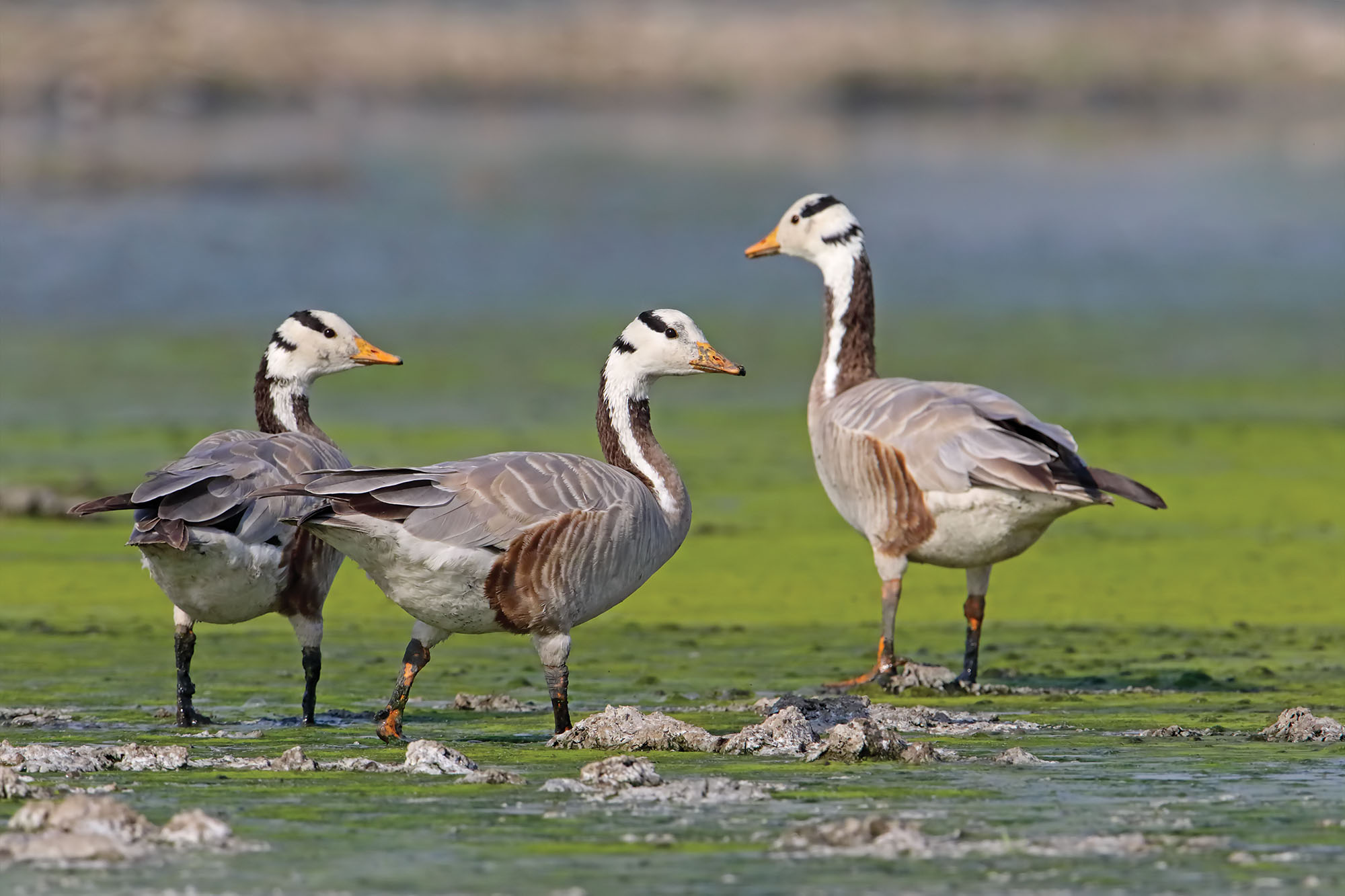 Bar-headed goose - a migratory species that breeds principally in Mongolia, China and Kazakhstan and winters in India, Pakistan and Myanmar. Photo taken in India.

The captivating photos keep me coming back to this book over and over, but I think it’s the Photographer’s Notes I appreciate most. Perhaps that’s because I, too, am a professional photographer and I know I couldn’t come close to achieving what Kramer did in this masterpiece.

The stories of Kramer’s travels to complete “Waterfowl of the World” would be a worthy read in and of themselves, as there’s no end to the challenges and hardships he faced, like the time he traveled to the remote mountains of Papua New Guinea to photograph Salvadori’s teal in their native habitat.

Most common above 8,000 feet, Kramer first traveled to Australia, then Port Moresby, then boarded a domestic flight to Tabubil to find these teal. Over 9,000 miles traveled, five days of sitting in a blind on a remote mountain stream from daylight to dark, and in the final 30 minutes, he got the shots he came for: a pair of Salvadori’s.

There was the trip to capture the Madagascar pochard, the rarest waterfowl in the world, presumed extinct for 15 years until its 2006 rediscovery. Following three days of commercial air travel from California to Antananarivo, Madagascar, Gary spent 10 hours a day driving on treacherous roads for the next few days before taking a 30-minute hike down a slippery slope and finding a place to camp next to a secluded lake. Kramer wasted no time, hopping in a canoe with a local guide. Five minutes later he captured what are likely the best images ever taken of these rare ducks. 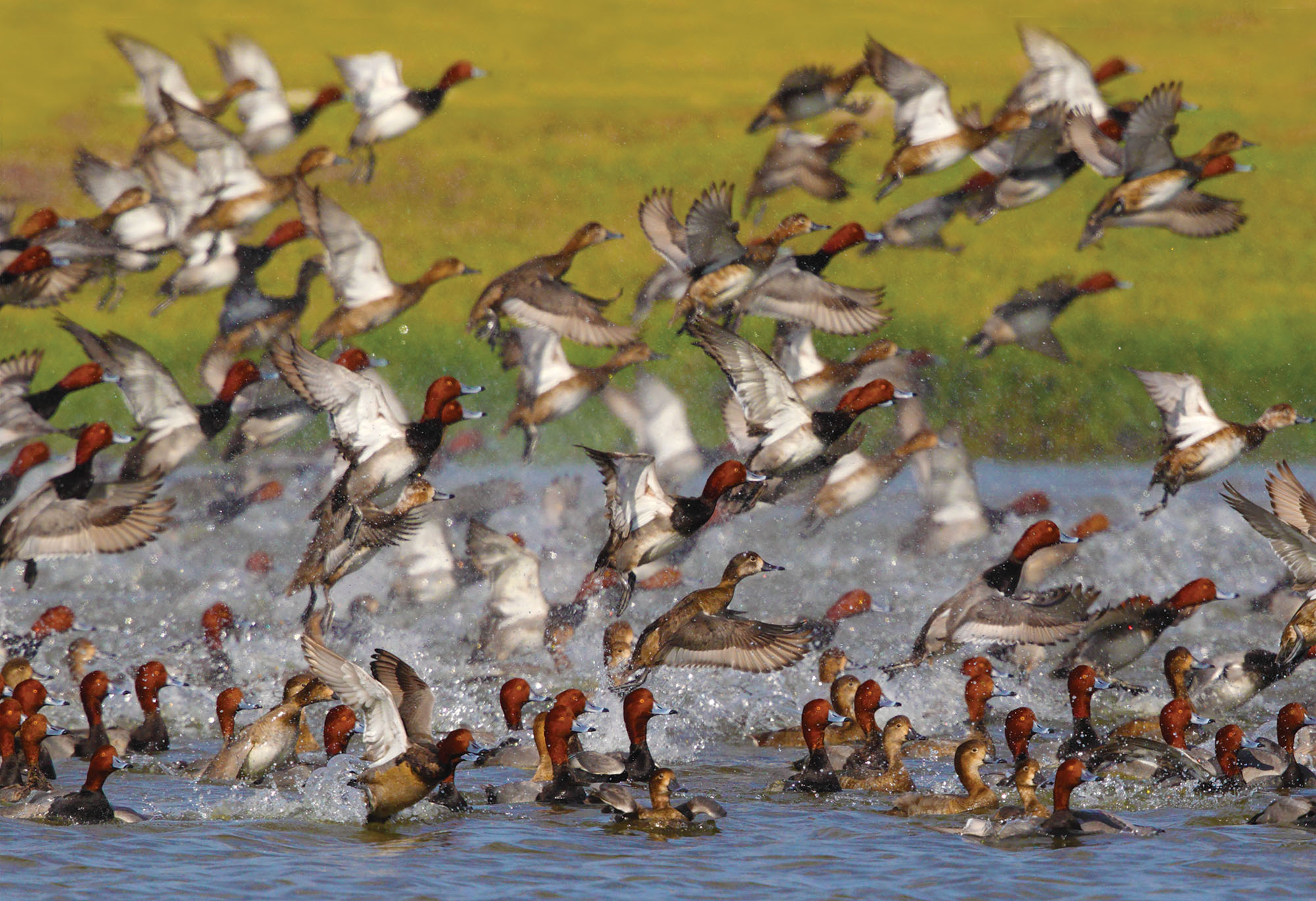 Redhead - a migratory North American species that breeds in the US and Canada and winters in the southern US and Mexico - photo taken in the Laguna Madre, Mexico.

The adventures go on. But it’s the stories behind the two ducks Kramer was unable to photograph that stand strong in my mind, primarily because of the effort he put in and the money he was willing to invest in the effort. One was the Eaton’s pintail, which is only found on two subarctic islands in the Southern Ocean, betwixt Africa, Australia and Antarctica. Despite Kramer’s willingness to travel 30 days by ship, and fork out over $20,000 of his own money, the French territory administration denied his multiple requests to visit the island, refused to issue him a scientific permit and never gave any reason for the denials.

The other was the Stejneger’s scoter. It was formerly considered a subspecies of the white-winged scoter until January 2019, when it was designated a full species. Kramer had planned to travel to Mongolia to photograph the Stejneger's scoter on its breeding grounds in May 2020, then to northern Japan in January 2021 to photograph them on their wintering grounds. Both countries, though, were closed due to the pandemic. He tried, without success, to get special permits to visit, and with no member of this species in captivity, that was that.

These species notwithstanding, with the printing of “Waterfowl of the World”, Gary Kramer will have published more photos of waterfowl than anyone on earth, 1,299 of them in this book, alone. If there were ever any question who the best waterfowl photographer in the world is, Kramer just raised the bar, possibly to a level that will never be reached.

Author Scott Haugen has more than 3,000 articles and multiple books to his credit. His small booking service includes waterfowl hunts in Alaska. To learn more, visit scotthaugen.com, and follow him on Instagram and Facebook. 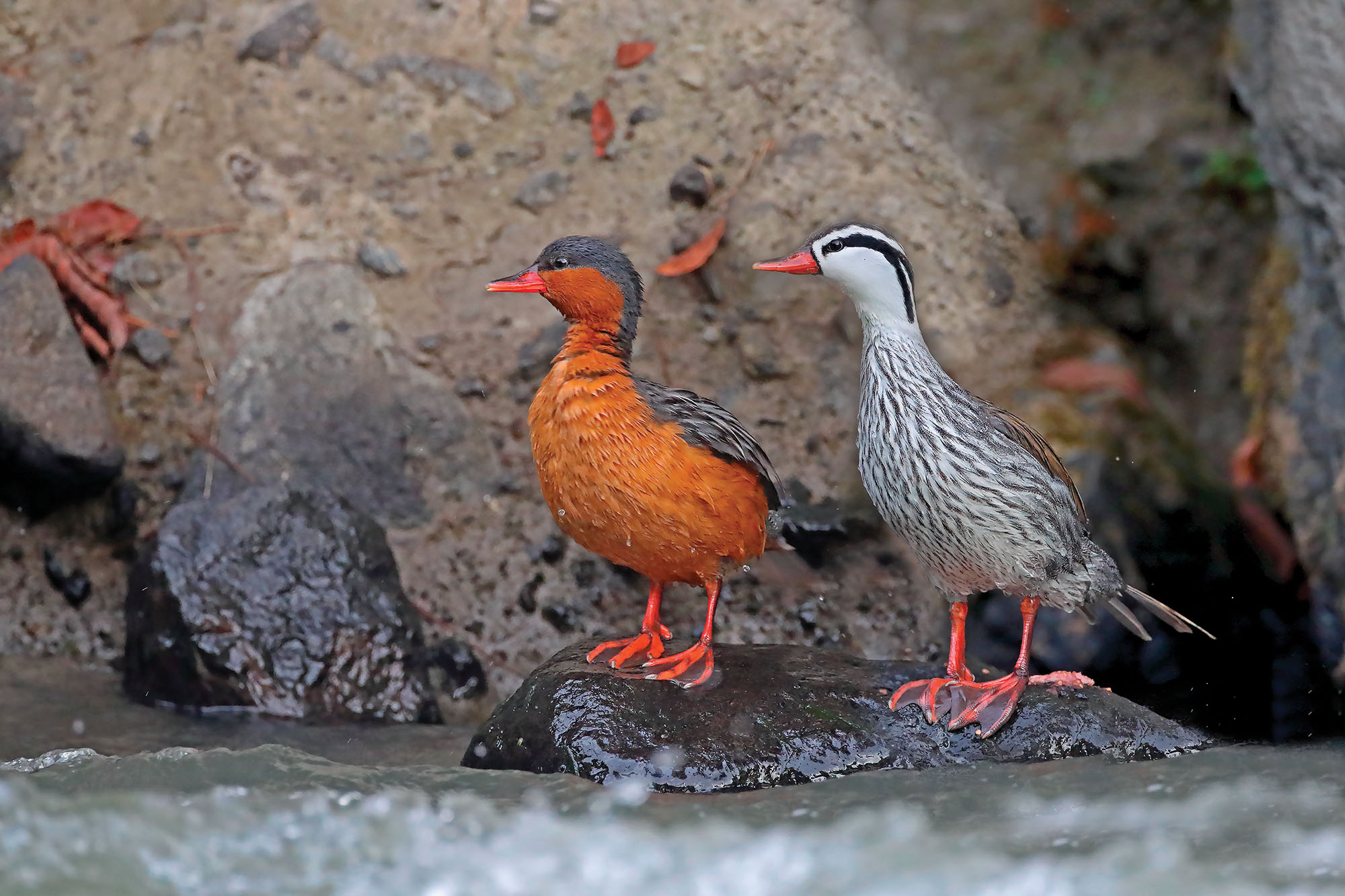 Torrent duck - a resident South American species found in mountain streams and rivers from Venezuela and Colombia south to Chile and Argentina. Photo taken in Colombia.