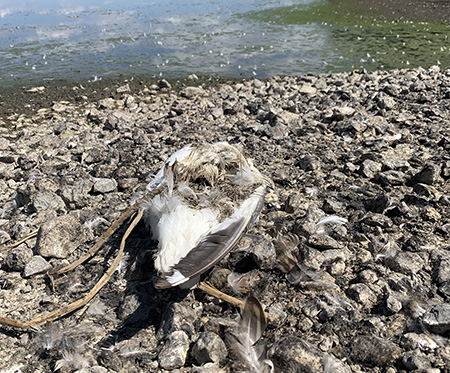 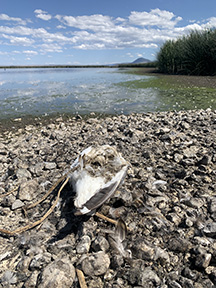 A botulism outbreak due to low water levels and other factors at Klamath Basin National Wildlife Refuge Complex claimed an estimated 40,000 [Updated: 9/21/2020] ducks and shorebirds over the summer. PHOTO BY CAROLINE BRADY

(Originally published in the Fall 2020 issue of California Waterfowl.)

DEVELOPMENTS:
•After CWA leaders met with Interior Secretary, a vital allocation of water was delivered to the parched refuge.
•Newly repaired wells help but are not a long-term solution for refuge water woes.
•Fish stocks struggle despite water allocations diverted for their benefit.

Donate to help save Lower Klamath

The Lower Klamath National Wildlife Refuge was shut off from all water deliveries until July 15. Then the Bureau of Reclamation began delivering 30 cubic feet per second to the refuge.
The Bureau was caught between a rock and a hard spot. The biological opinion for the coho salmon requires certain releases of water downstream for flushing flows. (A biological opinion is an official document used to establish what the government must do to aid endangered species.) At the same time, the biological opinion for Lost River and shortnose suckers requires that the elevation of Upper Klamath Lake be kept at a specified level. It is very difficult to do both and still have any water available for irrigators.
Back in March, farmers in the Klamath Project had been informed they would have a supply of 140,000 acre feet. Their normal full supply is 350,000 acre feet. Based on the allocation, farmers planted their crops in April. Then, on May 8, they were informed that the allocation was reduced to 80,000 acre feet, and that they had already used 20,000 acre feet to start their crops. Under that allocation, the farmers would have run entirely out of water by early July. Many farmers are using wells to irrigate, but power costs are expensive and the Klamath Basin is not a good groundwater basin.
In June, because of rain and cool weather, the Bureau announced that the farmers’ allocation would be restored to the original 140,000 acre feet, but the Lower Klamath refuge’s supply has not been restored. California Waterfowl is leading the effort to acquire water for the refuge. There is some residual water on the refuge from the very wet year in 2019, but it was drying out in late summer.
Last year was a very good year for breeding waterfowl, and 2020 appears to be producing many broods as well. Yet as the water dried out, the broods would be stranded and destroyed by predators. It was imperative that the refuge receive at least some water during the summer – at least enough to keep the 4,000-acre Unit 2 sanctuary full.

Meanwhile, the Yurok and Karuk tribes on the Klamath River are suffering a very bad year for salmon. Although they are getting flows in the river that are far greater than nature would provide, thanks to the storage reservoirs upstream, the runs of salmon are very small. Water quality, including algae blooms and warm temperatures, is a major problem. Some fisheries biologists say that the ocean conditions off the mouth of the Klamath River are to blame for the poor runs of salmon. The tribes are hurting economically and culturally.
The spawning run of suckers from Upper Klamath Lake was successful, but the juvenile fish will not likely survive their return to the lake. This has been the case for many years now. The spawners are long-lived, but they are reaching the ends of their lives, with no juveniles surviving to replace them. The shallow lake develops algae blooms during the summer that take up much of the oxygen in the water column, making it hard for fish to survive.
Neither the salmon nor the suckers have made any progress toward recovery since they were listed under the Endangered Species Act in the late 1980s. The allocations of water that have been made under the Act have not had positive results, but they, unfortunately, have led to water supply shortages for farmers and the refuges.

2 of 4 Wells Now Back in Action

Greg Heydeman, California Waterfowl’s Northeastern regional biologist, surveyed four wells on the Lower Klamath refuge last fall and applied for a grant from the state duck stamp fund for $120,000 to refurbish them. The grant was denied, but the U.S. Fish and Wildlife Service was able to find the money in its regional budget. The Klamath Basin National Wildlife Refuge Complex received the money last fall, and the refuge contracted with well repair companies. Two wells are now fully repaired, and two others are expected to come online soon.
When fully functioning, the wells collectively can produce about 6,000 acre feet over a period of months. They charge ditches, prepare fields for flooding and keep already-flooded fields topped off. The improved water source is very helpful, but they cannot make a dent in the 50,000-plus-acre refuge’s overall water supply needs.

California Waterfowl sent a letter in late June to the U.S. Bureau of Reclamation and requested they consider options to provide summer water to the refuge. CWA also requested written assurances that any future water-rights transfers from Oregon would be delivered in accordance with the priorities set by Oregon water-rights law.
Soon after, Rocque Merlo, CWA’s board chairman and Mark Hennelly, vice president for legislative affairs and public policy, flew to the Klamath Basin to meet with U.S. Interior Secretary David Bernhardt and Congressman Doug LaMalfa. A week later, the Bureau of Reclamation began to deliver 30 cubic feet per second of water to the Lower Klamath refuge.
The 50,092-acre refuge is critically important to duck hunters across the state because so many birds breed, brood and molt in this northeastern enclave. A group of current and former CWA board members recognize its importance and have formed a task force to raise money to support a reliable water supply. The money will support advocacy efforts and a video to inform the public of the refuge’s plight.

To donate to help save the refuge, click here.