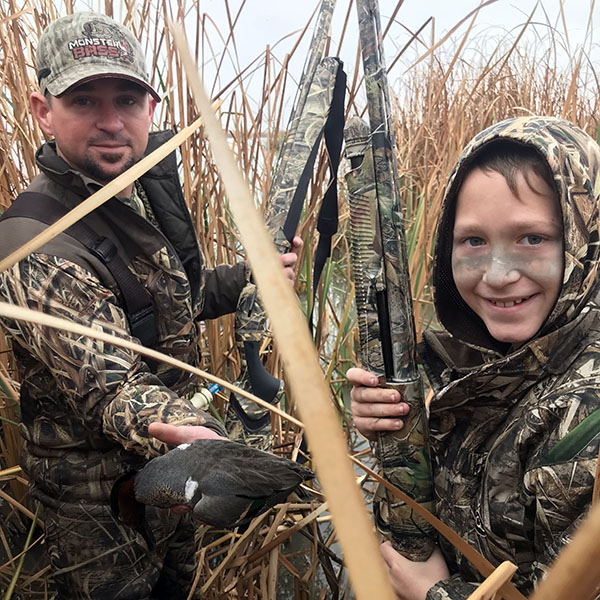 The family that hunts together ... 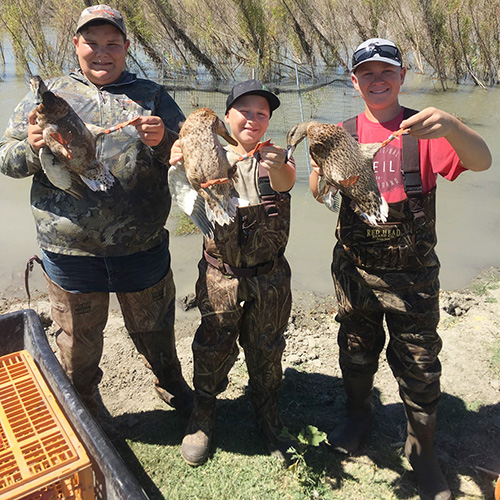 The Mathews family had ducks on their minds when they set their alarm for 3:30 a.m.

But this time was a little different than usual. It wasn’t duck season; it was the middle of summer, and their three-and-ahalf-hour journey—that’s each way, mind you—was going to end without a single shot fired.

Clairessa Mathews and her two boys—Tristen, 13, and Travis Jr., 9—along with Tristen’s buddy Ryan Huff, were on their way from Chowchilla (located between Merced and Fresno) to a California Waterfowl-sponsored tour of the Rancho Esquon egg salvage hatchery in Durham, just south of Chico.

While most of us are willing to make a long drive for a good hunt, the Mathews family was just as happy to make the trek for a good volunteering opportunity.

To anyone who knows them, this is not a surprise. They are an outdoors family, dividing their time between fourwheeling, soccer games, trap shooting and hunting. But, of course, nothing beats getting their hands on some birds.

Clairessa’s and Travis Sr.’s anniversary is Sept. 1, and for the past six years they’ve celebrated as a family with an opening-day dove hunt.

At first, Tristen and Travis Jr. were content tagging along with their BB guns. But soon the boys wanted in on the action, too.

In 2016, after chatting with some friends about duck hunting, Tristen passed his hunter education and hit the blinds to join the list of family hunters.

Last year, Travis Jr. completed the quartet, picking up a teal as his first kill, just like his big brother. Both boys joined CWA as junior Sprig members and both proudly have their first ducks mounted and displayed.

But for Tristen, just getting to hunt wasn’t enough.

When CWA’s flier for the August Chowchilla Banquet arrived in the mail, Clairessa saw it included a list of volunteer opportunities in the area, including duck banding, so she filled it out for Tristen. She soon got a message from CWA biologist Jason Coslovich and surprised Tristen with it. “I played the voicemail from Jason at dinner telling Tristen there was an opening that week if he was available,” Clairessa said. “Tristen was so excited he couldn’t wait.”

Soon Clairessa and the boys were helping CWA trap and band ducks in the Grasslands. After the first day volunteering, they signed up for the rest of the volunteer openings CWA had left for summer in Los Banos area.

“It is awesome to see how dedicated people can be to waterfowl conservation,” Coslovich said. “A lot of the volunteer work is not pretty, and those boys did it without one complaint, just smiles on their faces. Their help was much needed and their humor helped raise the banding crew’s spirits during the summer banding grind.”

The highlight of the summer, though, was the tour of the Rancho Esquon hatchery, which incubates eggs saved by farming partners from agricultural fields about to be harvested, then rears the ducklings. The boys helped band some of the ducklings before riding along in the CWA truck to release the ducks into the wetlands.

For Tristen, the summer of volunteering was a dream come true. He not only loves duck hunting but also loves the birds in general, finding them to be beautiful animals. One of his recent school science projects was on ducks and he even took to raising domestic ducks.

Of course, if it were up to him, Tristen and the family would duck hunt all year.

But having the volunteer opportunities that CWA offers in the off-season has helped to fill that void and given him a view of all the hard work that goes on behind the scenes to keep waterfowl populations strong.