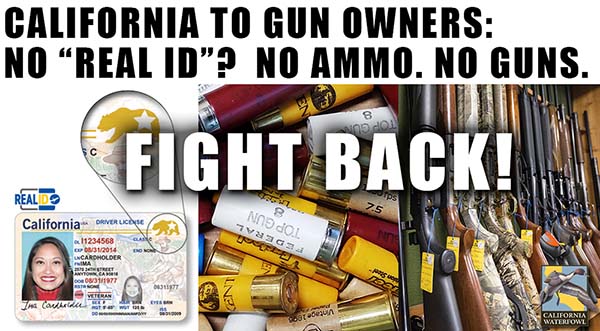 California Waterfowl needs your help quickly to fight a proposed state emergency regulation that would make it impossible for tens of thousands of law-abiding Californians to purchase guns and ammunition!

In this article, we’re going to explain the problem, and at the end, we’re going to give you two options for speaking up. Your voice is crucial in fighting this proposal, and the state must receive your comments by Friday June 21, so if you’re short on time, please skip to the end.

Much of the implementation of this system has been up in the air because DOJ has been slow to promulgate regulations. You can learn more about that here.

Proposal: This week, DOJ proposed emergency regulations that would require both ammunition and gun buyers to show either REAL ID (the new federally approved driver’s license), a passport, a green card or a certified birth certificate. You can read the complete details here.

The problem: There are many:

The solution: California Waterfowl and the California Rifle and Pistol Association are fighting this proposal. One thing that would help a great deal is for the DOJ to hear from lots of unhappy citizens.

There are two ways you can do this, and both will be better if you multiply your impact by sharing this with your friends:

The easiest and fastest way: Click here to go to CWA’s action alert and send a message to the state Attorney General expressing your concern about this proposal.

The more involved, but potentially more effective way: The formal commenting process for emergency regulations process requires people to send comments in writing simultaneously to both DOJ and the state Office of Administrative Law at these email addresses: Emergencyregs@doj.ca.gov and staff@oal.ca.gov. (You can also mail it, but there’s so little time left it’s best to email.)

It’s important to be respectful. You do not need to make an attorney’s case against the regulations – organizations like CWA and CRPA will do that; expressing your practical concern is sufficient. The key is for DOJ to receive a large volume of comments.

Note: The system CWA uses to generate emails to lawmakers and regulators would not allow us to send a letter to the Office of Administrative Law, which is why we have to give you two ways of doing this instead of just using our system. We apologize, but it’s not something we could fix instantly.

What’s next: California Waterfowl and its partners will fight this proposal and keep you abreast of the outcome.