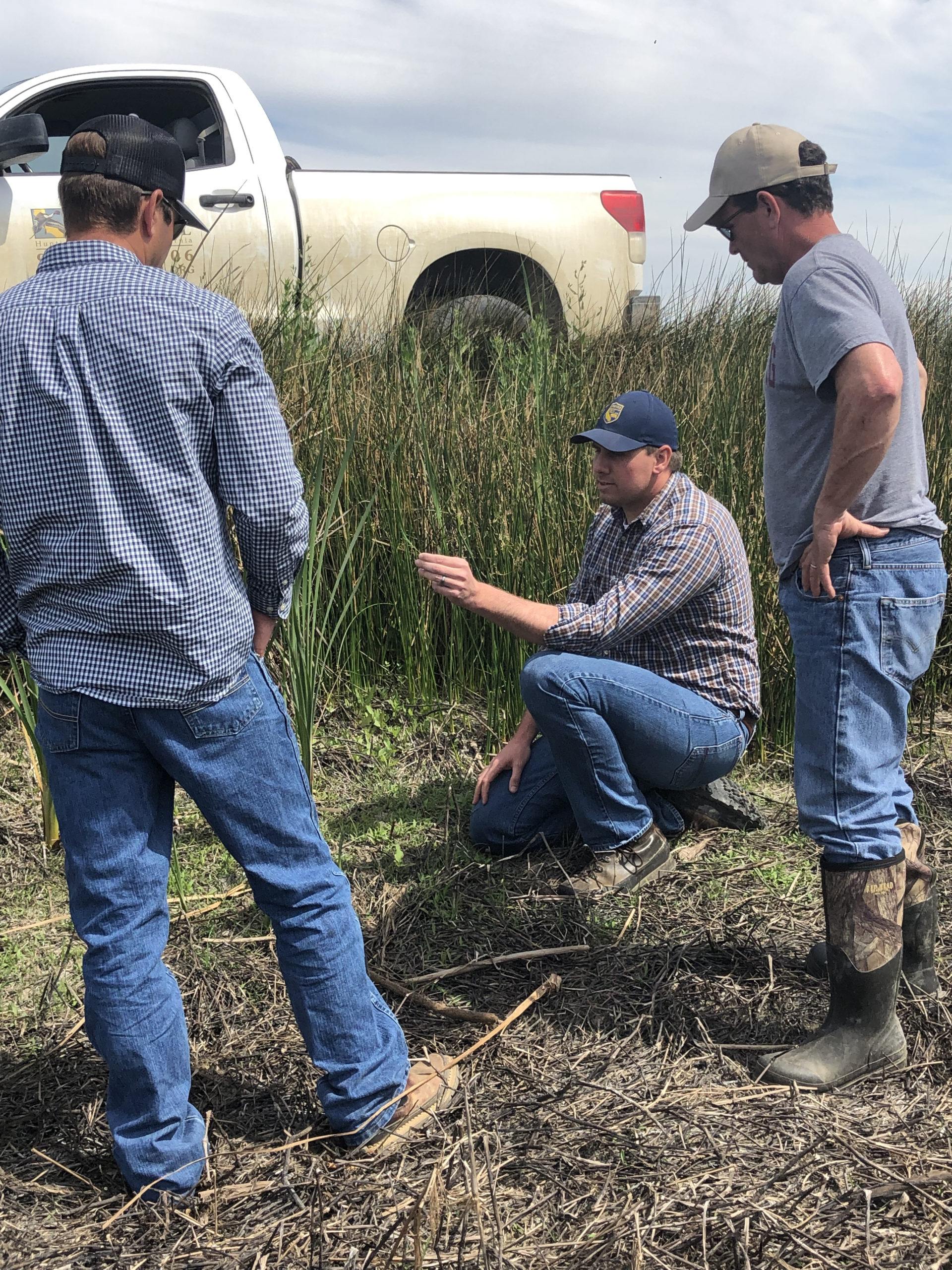 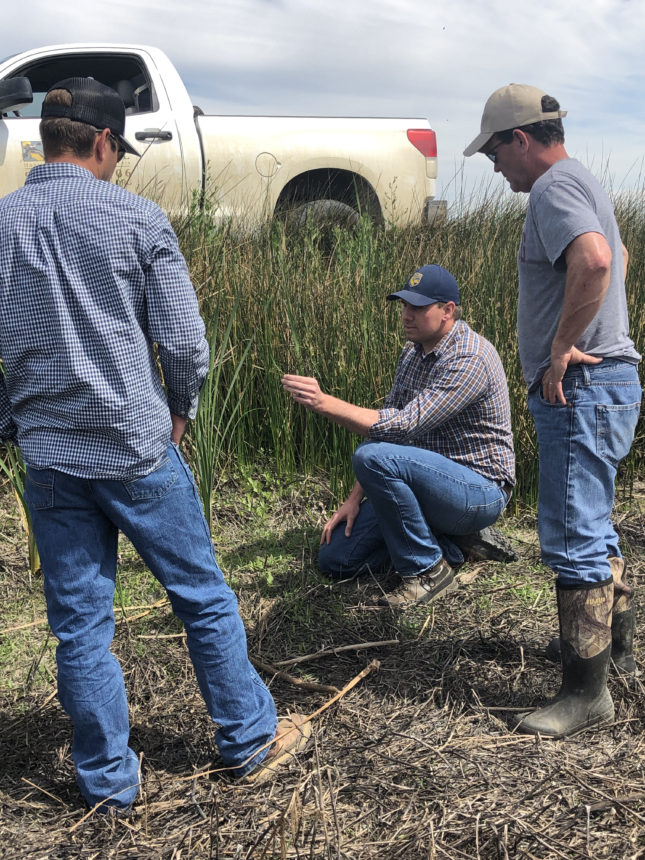 Brian Olson of the Fish and Wildlife Department identifies moist-soil plants at seedling stage for landowners enrolled in the Presley Program. PHOTO BY CALIFORNIA DEPARTMENT OF FISH AND WILDLIFE

It’s no secret to most duck-club owners in California that our private lands are critical to the success of waterfowl. However, I’d argue that most duck hunters don’t realize just how important they are. Approximately two-thirds of the managed wetlands in the Central Valley are privately owned, and close to 95% of the total land area in this region is under private ownership. Not to diminish the extreme importance of our public lands, but if we are to have any hope of ensuring that the food, nesting and brood-rearing requirements of waterfowl and other wetland-dependent species are met here, we need to be working with the private sector.

Fortunately for those of us who like to chase ducks, people much smarter than I initiated programs a long time ago to help engage private landowners in conservation efforts. Over 30 years ago, state Sen. Robert Presley established one of my favorite programs here at the Department of Fish and Wildlife: the California Waterfowl Habitat Program, also known as the Presley Program.

The Presley Program compensates landowners who manage their lands to meet a conservation need. These needs or goals are identified by a coalition of state, federal and private entities called the Central Valley Joint Venture. The Presley Program has always been very popular with landowners. The Department integrates the goals of landowners with the goals of the Department and both parties develop a management plan for the property. Last year, the program took new applications for the first time in over 15 years because new funding became available with the passing of Prop. 68.

Here are the results of that effort, and a look at where the program is going:

How many new acres were enrolled in the program?

Contracts were still being finalized at the time that this article was written, but approximately 23,000 acres across 80 properties have been enrolled. Most of these properties are in the Sacramento and San Joaquin basins, with a handful coming from the Delta, Suisun and Tulare Basin.

How many acres has the program benefited since it was developed?

The Presley Program is one of the longest running private-land incentive programs within the Department of Fish and Wildlife. Since 1987, it has enhanced more than 50,000 acres of managed wetlands.

Is there the potential to do more?

You bet! All current funding has been allocated. However, there is still a need: More than 100 private properties are on the waitlist for when additional funding becomes available. If you’d like to be added to the waitlist, or if you’re interested in learning more about the program, click here to visit our website or contact me at brian.olson@Wildlife.ca.gov.

What type of wetlands qualify as brood ponds for the program?

Semi-permanent wetlands are generally flooded from early fall through the end of July, while reverse-cycle wetlands are left dry during the fall and most of the winter, then flooded in late winter and early spring to late July. These two types of wetlands provide critical habitat to breeding waterfowl during the summer when wetland habitat is scarce.

What type of waterfowl and other wildlife benefits do we see as a result of this program?

Landowners in the program are required to implement management strategies that enhance the land’s value for waterfowl and wetland-dependent species. This starts with having seasonal wetlands flooded at the proper depth during the fall and winter because very few birds can access food resources in a wetland when the water is deeper than 12 inches. Landowners are also required to maintain seasonal wetlands until the drawdown date that’s identified in their annual work plan. This is typically between March and May, depending on the region and the targeted plant types. Drawing down during this window also optimizes the benefits of seasonal wetland acres to spring staging and breeding waterfowl, as well as shorebirds.

During the late spring and summer months, landowners are required to control undesirable plant species, irrigate seasonal wetlands to promote desired plant types, and disc within seasonal wetlands to enhance seed production of moist-soil plants, such as swamp timothy, watergrass, and smartweed, within their wetlands. In general, landowners can expect the carrying capacity of their seasonal wetlands to double as a result of the program. In areas where landowners have agreed to it, brood ponds (semi-permanent or reverse-cycle wetlands), must be maintained from April 1 through July 31. The goal is not only to provide for the habitat needs of wintering waterfowl, but to also provide for the year-round needs of waterfowl breeding in California.

What priority was given to properties willing to manage for brood ponds?

According to the Central Valley Joint Venture, the Central Valley has less than half of the semi-permanent wetlands (brood ponds) we need in this region. Semi-permanent wetlands are a lot more expensive to manage than seasonal wetlands, and usually don’t offer the same quality of hunting as a moist-soil unit that’s seasonally flooded. It’s easy to see why these have become so limited across the landscape.

However, getting additional brood-pond acreage on the landscape is critical for improving local mallard populations, and populations of other wetland-dependent species that utilize this habitat type.

In an attempt to get us closer to Central Valley Joint Venture goals for summer wetlands, we gave properties that were willing to manage for semi-permanent or reverse-cycle wetlands additional points in the scoring process (this increased the odds that that the property was selected for enrollment), and scaled the number of points based on the percentage of the property that they were willing to manage as brood. The more acres a landowner was willing to manage as brood water, the more points he or she got. We also bumped the incentive rate to $60/acre (compared with $30/acre for seasonal wetlands) to further encourage the management of this habitat type. The end result was that we were able to double the percentage of acres that were managed as brood in the program.

If you hunt in the Central Valley, you have undoubtedly noticed the drastic decline in mallard numbers. This basin has historically been the major breeding region in the Central Valley, yet the breeding population is currently 63% below the long-term average in the Sac Valley. The emphasis on semi-permanent wetlands in this latest solicitation is largely an effort to get us closer to population objectives identified by the CVJV.

How many additional acres of brood ponds will be on the landscape as a result of this past solicitation?

We’re still finalizing contracts with private landowners, but we anticipate there being an additional 3,300 acres of semi-permanent and reverse-cycle wetlands spread across 103 wetland units as a result of this solicitation. We still have a lot of work to do to get us to where we need to be, but this is a step in the right direction to getting locally breeding duck numbers closer to Central Valley Joint Venture objectives. Our long-term goal is to have approximately 20% of the wetlands enrolled in the program be managed as semi-permanent or reverse-cycle wetlands.

What other benefits can landowners get out of the program?

You get CDFW as a partner and a team of experts who do this for a living. They’ll help you optimize your property by increasing the diversity of desirable plant species, and the productivity of your wetlands for waterfowl and other wetland-dependent species of wildlife. This approach typically improves the quality of hunting on your club, and results in more birds in the bag.

ABOUT THE AUTHOR: Brian Olson is the Comprehensive Wetland Habitat Program coordinator at the California Department of Fish and Wildlife.