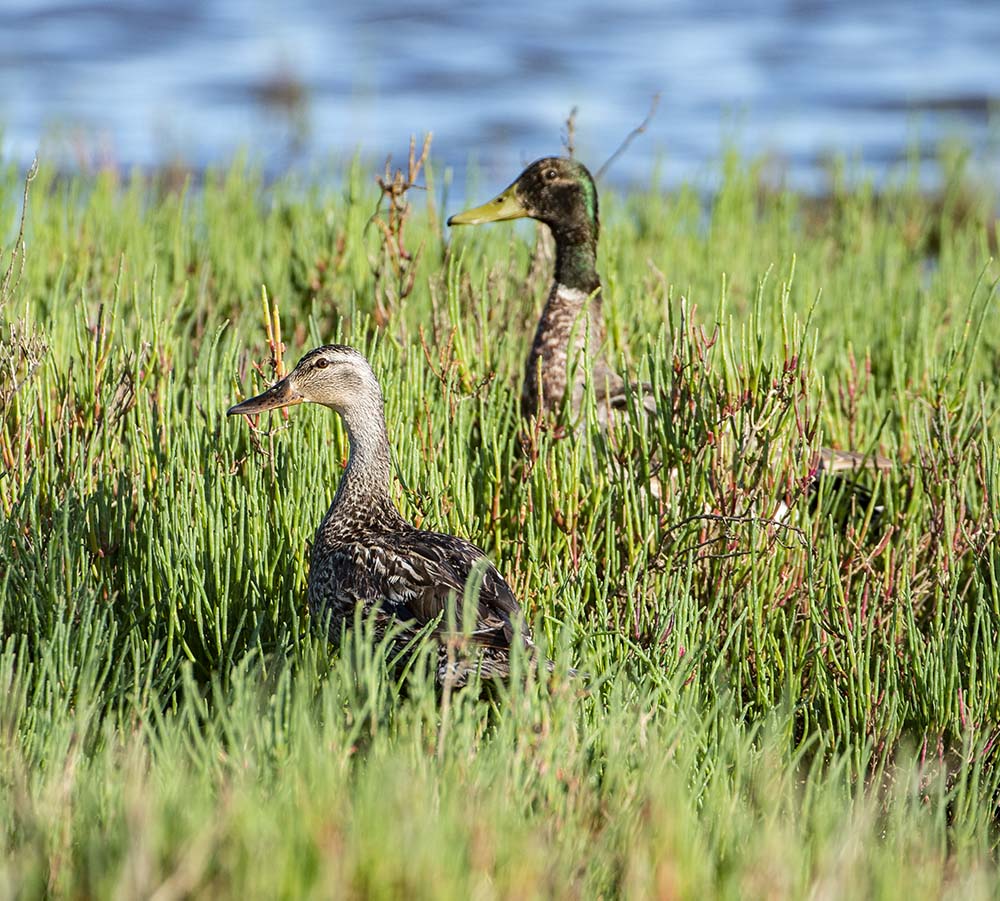 Mallard breeding population down this year 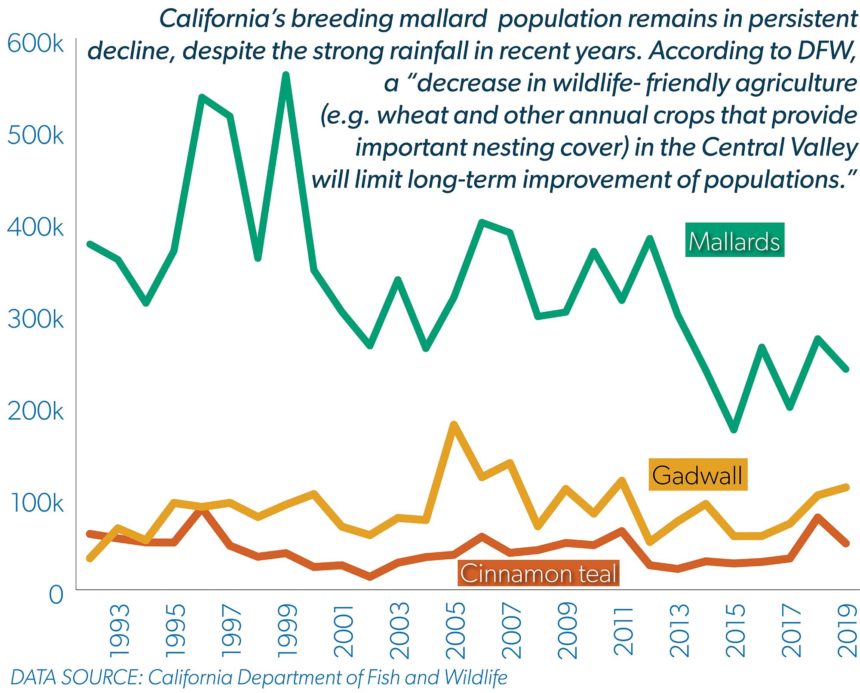 California's breeding population of mallards is down 12% over last year, and down 28% over the long-term average, according to a state Department of Fish and Wildlife survey released today.

The survey is conducted by air over the same geographic areas year after year, and always around the same late April and early May dates. It is not a complete census of waterfowl in the state, and it doesn't reflect what people may be seeing on the ground today. But it remains a critical tool for tracking year-to-year trends.

Dan Skalos, a state Department of Fish and Wildlife waterfowl program biologist, said in a press release the decline was disappointing, given the precipitation we've had since the end of the drought. “It would have been nice to see higher numbers in the survey, but there may be some increases still ahead,” he said. “The abundant rainfall we saw in May likely led to a longer nesting season and should contribute to better production going forward.”

Skalos also noted that the decrease in wildlife-friendly agriculture - wheat and other annual crops that provide important nesting cover - in the Central Valley will limit long-term improvement of populations.

The Sacramento Valley has seen the most steep declines in mallard breeding populations, down 56% compared with the long-term average. Harvest tends to track with population, so not surprisingly, the mallard harvest is also down in the Sacramento Valley. It's important to note that habitat - not harvest - is what limits populations. 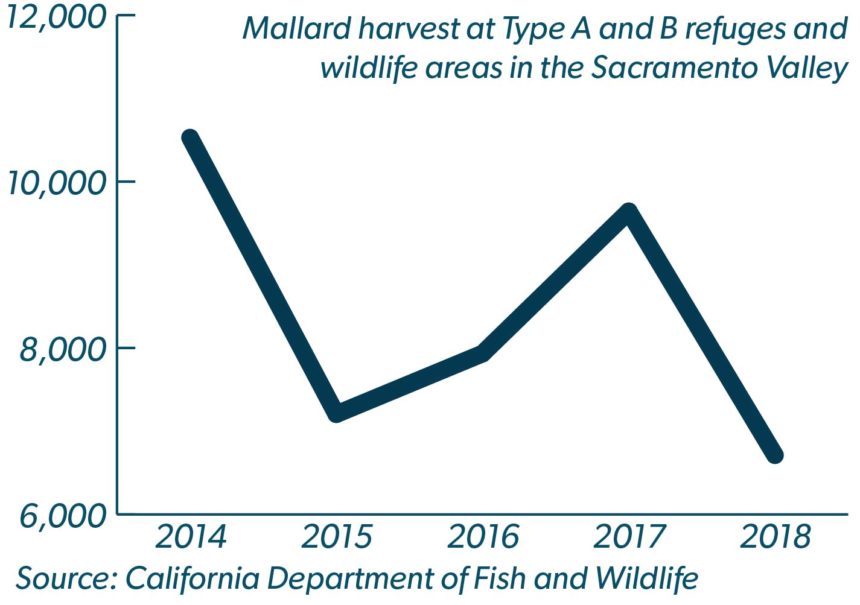 "The 56% percent decline in the Sacramento Valley is disappointing and needs addressing," said CWA Vice President for Legislative Affairs and Public Policy. "Much of this is due to reduced nesting habitat from changing farming practices, including clean farming and declining winter wheat acreage. The Nesting Bird Habitat Incentive Program that was established in law last year could help, but it needs funding. CWA is currently working with the state Legislature to identify appropriate funding sources."

CWA Waterfowl Programs Supervisor Caroline Brady said the duck numbers are no surprise given land-use changes that the Central Valley has experienced.

But she said there's an opportunity to do something important. "California mallards, gadwall and cinnamon teal are attracted to winter wheat fields for nesting, and nest densities and nest success rates in cereal grains can be outstanding. But harvest of grains typically coincides with hatching of mallard nests," she said. "So CWA is working to develop an incentive program for wheat growers that will help ducks that nest in their fields to hatch naturally by delaying harvest of the crop. Stay tuned!"

California Waterfowl is working a number of other fronts to improve breeding habitat for California's mallards and other local ducks by:

- Fighting for water for the Lower Klamath National Wildlife Refuge, a key breeding and molting area where water supplies have been throttled, at great expense to waterfowl.

- Helping to secure $10 million in 2018's Prop. 68 for the Presley Program, which prioritizes funding for properties that maintain summer brood ponds.

- Creating or improving nearly 600 acres of breeding habitat in 2018 (and our regional biologists are working on more this year!)

- Running the California Wood Duck Program, which places thousands of nest boxes across the state.

Here is a complete accounting of the waterfowl counted in the state's breeding population survey (click here for the detailed report). 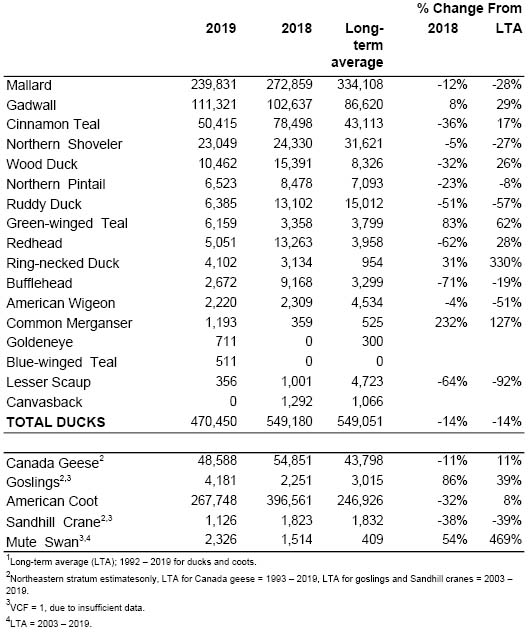