Unit 2 in Lower Klamath National Wildlife Refuge got help from generous donors last year whose contributions sent water to the refuge. In this photo, a California Waterfowl tech stands in Unit 2 where there is usually much more water. PHOTO BY CAROLINE BRADY

(Originally published in the Spring 2021 edition of California Waterfowl Magazine.) 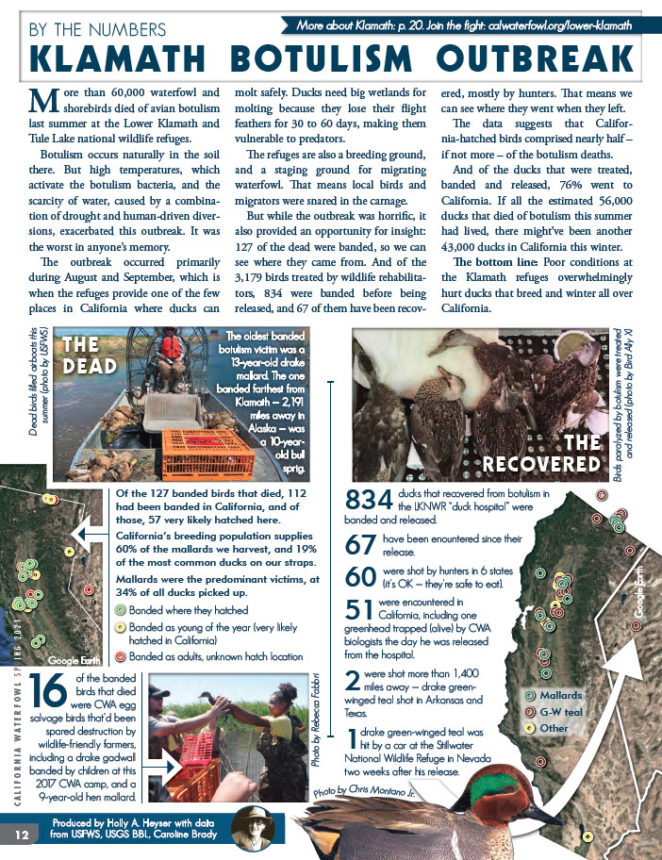 RELATED: Click here to see what bands tell us about birds caught up in the botulism outbreak in the Klamath Basin this summer.

You are probably well aware that finding a reliable, long-term water supply for the Lower Klamath National Wildlife Refuge has been California Waterfowl’s No. 1 policy priority for the past several years. We’ve been focused and engaged on this issue since at least 2001, when the Bureau of Reclamation shut down the water supply to the Klamath Irrigation Project.

The past year was in some ways the worst year ever for the Lower Klamath refuge: only enough water to flood approximately 2,000 acres during breeding and molting season; a botulism outbreak that killed at least 60,000 birds; the breakdown of talks among all water users about a comprehensive redistribution of water; and the lowest bird numbers ever in October. In other ways, though, 2020 provided rays of hope for the long-term restoration of the refuge’s water supply.

HOPE COMES FROM THE NORTH

A rancher from above Upper Klamath Lake has offered his water rights to the Lower Klamath NWR. He believes he can send the water he uses to irrigate his ranch to the refuge, along with water rights from other ranches he will purchase. He needs to be compensated for his water in order to purchase enough ranches to be able to graze the same number of cattle as he does on his irrigated ranch.

By combining ranches and sending the irrigation water downstream to the Lower Klamath refuge, he believes he can make approximately 30,000 acre-feet of water available. He is asking $2,000 per acre-foot, but may be willing to negotiate with a buyer who can provide the money. The total amount is $60 million for 30,000 acre-feet. The U.S. government could pay this money to protect the resource, but it will take some time to get an authorization from Congress.

California Waterfowl is working with other organizations, including Ducks Unlimited, Audubon and the Intermountain West Joint Venture, to find other ways to share water supplies with agriculture and other water users.

When the Trump Administration attempted to form a “coalition of the willing” to work toward a new comprehensive agreement, California Waterfowl joined with the Cal-Ore Wetlands & Waterfowl Council, Ducks Unlimited and the Oregon Hunters Association as participants on behalf of the refuge. The process has largely broken down, although many of the nongovernmental organizations are continuing to meet and discuss projects and actions that can be taken.

Working with Ducks Unlimited, California Waterfowl has also been participating in a series of meetings with the irrigation districts in the Klamath Basin to discuss water conservation, affordable power generation and water management strategies that might yield additional water for the refuge. Groups including the Intermountain West Joint Venture, Farmers Conservation Alliance and Sustainable Northwest have joined in this effort and are making progress in defining projects and finding funding.

The most promising prospect, however, arises from the Oregon cattle rancher’s offer. This water supply has the benefits of being very reliable and not interfering with the water needs of any of the other water users in the Klamath Basin.

In recognition of this opportunity, Interior Secretary David Bernhardt had included funding for the purchase of water rights for the Lower Klamath refuge in a list of projects to be funded from the Land & Water Conservation Fund. California Waterfowl is also seeking funding from the infrastructure portion of the latest COVID relief bill, and from a potential water resources bond in the California Legislature.

These sources of funds, however, are still at least a year away from being available. Therefore, California Waterfowl’s Klamath Task Force is seeking private contributions to provide bridge funding to purchase some amount of water this spring. The private contributions will be structured in such a way as to be fully reimbursable by the federal government when it makes funding available.

California Waterfowl is focused and committed to finding a longterm solution to the water crises that the refuge and waterfowl have endured. CWA also is working to head off cataclysmic drought and botulism outbreak like we saw in 2020.