All indications are that the Lower Klamath NWR will not receive any water deliveries at all during 2021. This sets the stage for a poor waterfowl breeding season in what should be the state's most productive breeding area, precious little habitat for migrating waterfowl and shorebirds this spring and fall, and – if summer temperatures are high – a repeat of the horrific 2020 avian botulism outbreak.

Snowpack and other precipitation are below normal for the region, and the Klamath Reclamation Project is projected to receive no more than a third of the water needed to supply its contractors. The refuge does not receive any water from the Project until all its contractors receive their supplies. 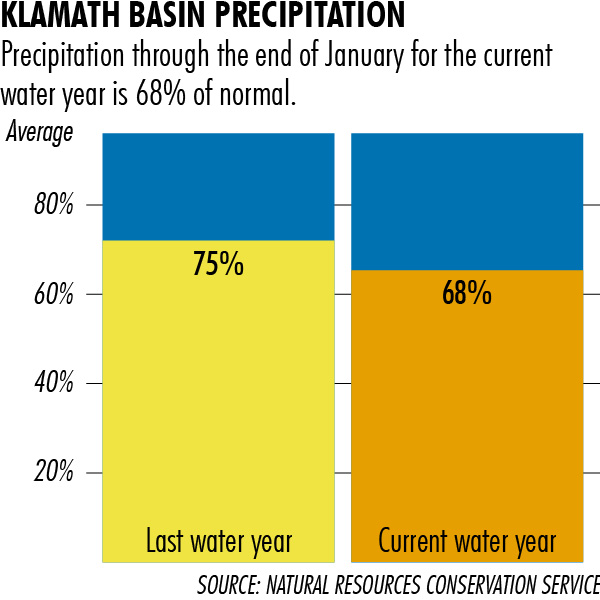 The Klamath Tribes are threatening to sue to ensure that enough water is left in Upper Klamath Lake to protect the spawning of the endangered Lost River and shortnose suckers.

Donate for Lower Klamath Sign up for LK newsletter

The Tule Lake Irrigation District, which supplies water to the Lower Klamath refuge through pumps and tunnels for flood-control purposes, still has to fill a sump that was drained in 2020 to restore waterfowl habitat, promoting the growth of waterfowl food plants. The district may pump some water in the fall, but only if water conditions improve substantially.

The lack of water at the refuge affects migrating waterfowl, shorebirds and bald eagles in the entire Pacific Flyway, as well as ducks that breed in California’s Central Valley. Ducks and geese use the refuge for staging their migrations north in the spring and south in the winter, for breeding and brood rearing in spring and summer, and molting in late summer and early fall.

Needless to say, hunting on Lower Klamath will not be possible except possibly for geese in dry fields. With no water available, however, there will be no grain crops in those fields to attract the geese.

Restoring a water supply to the Lower Klamath NWR is a primary goal of California Waterfowl. A series of actions and decisions by the federal government have resulted in the conversion of an historic lake and wetlands into a desert.

The Lower Klamath Task Force, consisting of current and former members of the California Waterfowl board of directors, is working to raise money and awareness of the magnitude of the problem, not just for the Klamath Basin but for the Pacific Flyway as a whole.

Despite the dire lack of water in 2020 and coming in 2021, the task force is making progress in acquiring water rights and in focusing the federal government on the need to address the water supply disaster.