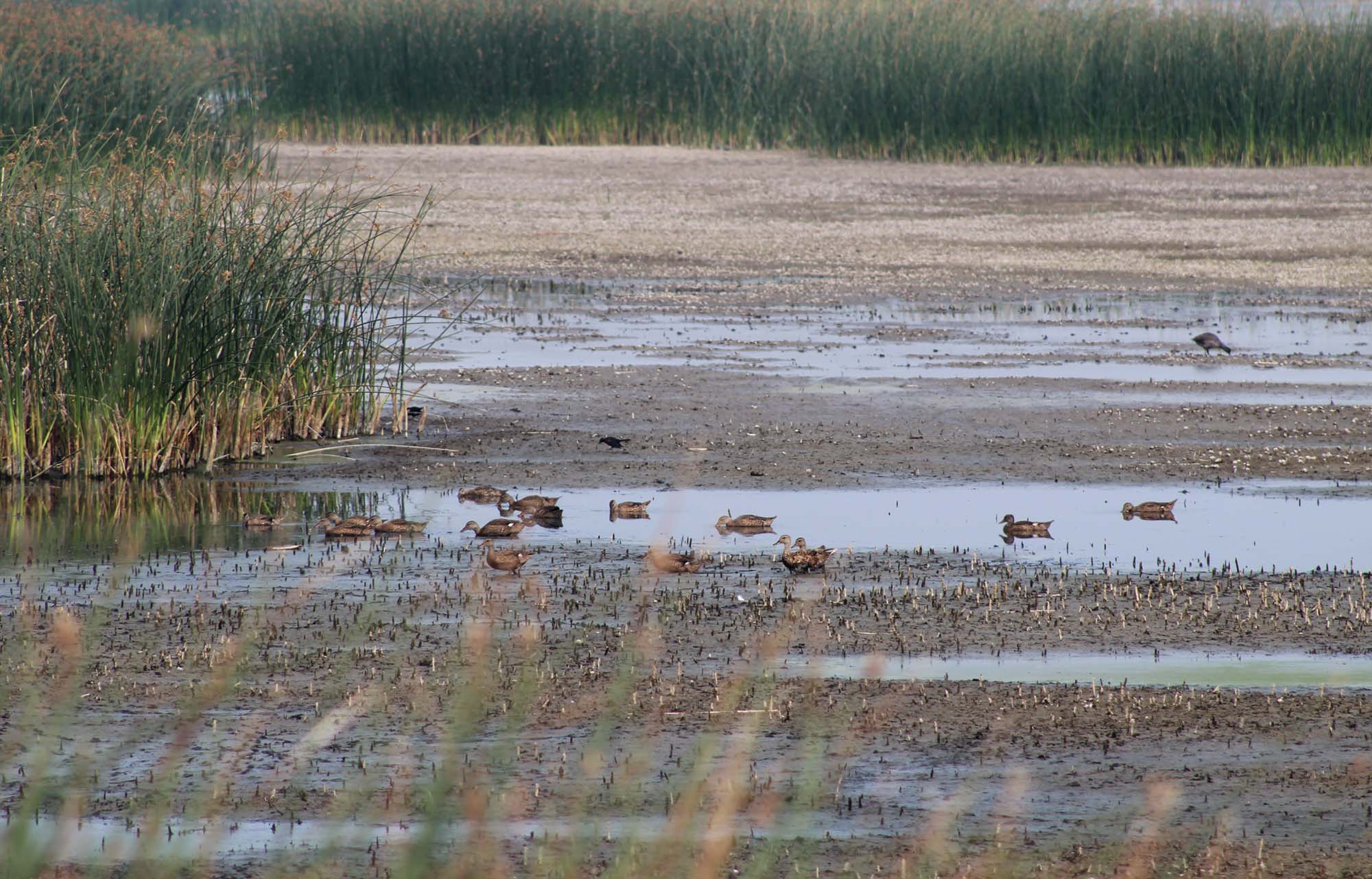 (Reprinted from the Fall 2018 issue of California Waterfowl Magazine)

BY JEFFREY A. VOLBERG, DIRECTOR OF WATER LAW AND POLICY 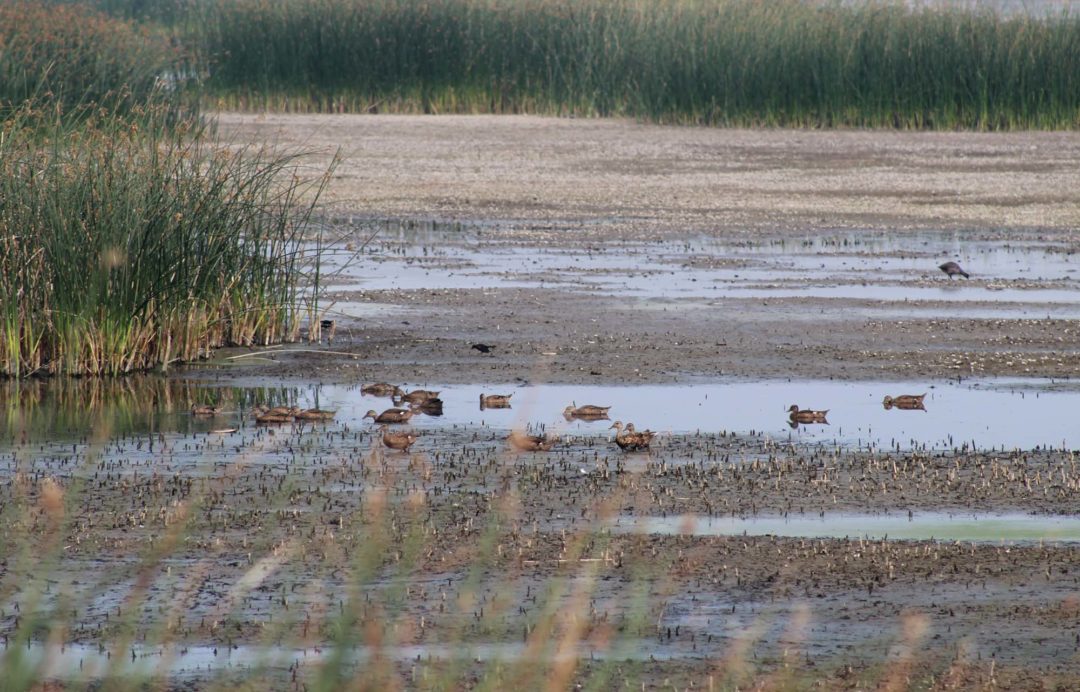 Duck broods at the Lower Klamath National Wildlife Refuge this summer faced disappearing water before they had matured enough to fly in search for more./PHOTO BY CAROLINE BRADY

It seems that every water issue revolves around fish, not waterfowl. The state and federal Endangered Species acts create rights to water that override all other rights. Water for waterfowl generally tends to be subordinated to most other water supply needs, but water for endangered fish always takes precedence.

In the Klamath Basin, three species of fish have been listed under the federal Endangered Species Act. In 1987, the U.S. Fish & Wildlife Service listed the shortnose sucker and the Lost River sucker as endangered.

Suckers used to be very abundant in the Upper Klamath Lake and its tributaries. However, diversion dams on the tributaries impeded their spawning migrations. Withdrawal of water from the Upper Klamath Lake for irrigation of farmland has also been cited as a stressor on the sucker population. The suckers were treated as “rough” fish and were often killed just to remove them from canals and ditches.

Although there are approximately 100,000 suckers in Upper Klamath Lake, most of them are old and are past spawning age. Very few young fish are being born to sustain the population.

A series of hydro-electric dams on the Klamath River has restricted access to spawning grounds for the coho and chinook salmon. Also, diversions of water for the Klamath Project, an irrigation system supporting farms in the Klamath Basin, have affected water levels downstream. This has resulted in outbreaks of a waterborne parasite that infects and kills thousands of salmon in the mainstem Klamath River.

The Klamath Project is a federal irrigation project in the Klamath Basin that provides irrigation water for thousands of acres of farms. These farms were originally made available in the 1920s to veterans returning from World War I. The climate and soils support a variety of high-value crops, including potatoes, hay, grain, horseradish and mint.

In 2001, due to a drought, the Bureau of Reclamation was ordered by the U.S. Fish & Wildlife Service to shut down deliveries to farms from the Klamath Project in order to maintain a level of water in the Upper Klamath Lake that was considered to be necessary for the protection of the suckers. An armed confrontation ensued when farmers attempted to open the headgates and release water to irrigate their farms.

The following year, the federal government allowed the release of water for farms, but 20,000 coho and chinook salmon were killed by a parasite outbreak in the lower Klamath River. Since then, water deliveries have been allowed under a “biological opinion” adopted by the U.S. Fish & Wildlife Service, which sets amounts and times for water deliveries, with the intent of maintaining a high level of water in Upper Klamath Lake and making water available to flush the parasites out of the lower Klamath River.

In 2010, the federal government joined in a “Klamath Basin Restoration Agreement” that resulted from negotiations with the states of California and Oregon, Klamath Project irrigators, tribes and conservation groups. The KBRA divided up the water available in the Klamath Basin among the various groups in order to avoid another crisis. The Klamath refuges would have received a full allotment of water in nine out of ten years.

Despite the efforts of all the local interests, the KBRA was never authorized by Congress. The provisions of the KBRA were linked to the removal of the four hydroelectric dams on the Klamath River. The local congressmen disagreed with removing the dams and held up the authorization. The KBRA expired by its own terms at the end of 2015.

Without the KBRA, the refuges have been short of the water needed to provide a safe and nutritious habitat for millions of migrating birds. Outbreaks of avian botulism and cholera have resulted in the deaths of thousands of ducks and geese. Hunting opportunities have been limited on what was once one of the great waterfowl hunting areas in California. Restrictions in the biological opinions have ensured that, even if adequate water is available, it can’t be taken for use at the refuges during the falls months when it is needed for the ducks.

In the past year and a half, Secretary of the Interior Ryan Zinke has made a major effort to resolve the water supply issues in the Klamath Basin. The Bureau of Reclamation has been working with the refuge staff to develop a schedule of water deliveries. The refuge staff has been invited to participate in the re-consultation of the biological opinions for the first time. The Bureau and project irrigators have been working to accommodate the needs of the refuges in a way that also works for the irrigators.

So it was very disappointing this spring when certain tribes sued for more water to protect the coho salmon and the suckers. A federal judge in San Francisco required the Bureau to flush water from the Klamath Project down the Klamath River to clear out the parasite that infests the coho salmon and to keep 50,000 acre feet of water in Upper Klamath Lake in case it is needed for another flush. The Lower Klamath Refuge released the water it had received from the Klamath Project to reduce the water needed from the irrigators.

The tribes also sued to shut down the Project again to protect the suckers in Upper Klamath Lake. This would have been devastating to the farmers, who had already planted their crops. However, on July 20, the judge declined to order the shutdown, stating that the tribes had not made their case for the need to take all the water. The judge did not order that Project water be made available for the suckers, but transferred the case to a federal district court in Oregon.

Without a new comprehensive agreement, these water supply issues will never be resolved. Farmers, tribes, fish and waterfowl will continue to suffer from a lack of water. To its credit, the current administration has put a great deal of effort into working with the various interests.

The issue of water supply for the Klamath refuges is a top priority for California Waterfowl. California Waterfowl’s board supported the KBRA before its expiration. Our government relations team has written letters to the Secretary of the Interior that have resulted in water deliveries during the drought and have visited with top officials in the Interior Department. We keep in touch with hunters in the Klamath Basin and with the refuge managers. Our communications team has documented on video the effects of the natural and regulatory drought on the refuges. On July 18, California Waterfowl joined in a letter with a number of agricultural and waterfowl organizations calling for a comprehensive resolution to these ongoing crises.

If you would like more information about California Waterfowl’s efforts in the Klamath Basin, contact Jeffrey Volberg at jvolberg@calwaterfowl.org or 916-217-5117.