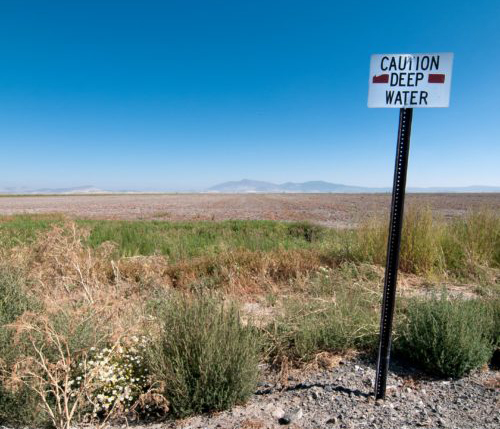 The Klamath Basin is dry! For the first time in history, America’s first National Wildlife Refuge (NWR) established for waterfowl conservation purposes by Theodore Roosevelt is a barren wasteland. Millions of migratory waterfowl, shorebirds and other essential wildlife species will not have anywhere there or at neighboring Tule Lake NWR to rest, refuel and prepare for their migration. This could have a permanent, lasting effect on migrating birds and local wildlife along the Pacific Flyway. Healthy wetlands in the Klamath Basin not only provide refuge for migratory and local species; they also help filter groundwater and recharge aquifers. Dry wetlands could result in people losing access to a vital water source that is necessary for drinking water and for sustaining the local economy.

HISTORY AND IMPACT
Due to reduced water deliveries, waterfowl counts in both 2020 and 2021 at the Klamath refuges were among the lowest ever recorded. In 2020, 60,000 waterfowl and other waterbirds also died from an avian botulism outbreak, which was exacerbated by low water conditions. Other wildlife like bald eagles, a large number of which spend the winter in the Klamath Basin, also suffered from lack of suitable habitat. Ongoing drought, water kept in-stream for endangered fish, increased pumping costs, and lack of senior water rights have combined to cut water deliveries to wetlands to historically low levels. Wildlife-friendly crops like wheat, barley, and other cereal grains have additionally declined in light of reduced water deliveries, leaving substantially less food for waterfowl and causing significant financial harm to Klamath Basin farmers.

“These unprecedented dry conditions at the refuges will negatively impact hundreds of thousands of migrating waterfowl that will be heading south in the next month or so from their breeding grounds in Alaska and Canada,” stated John Carlson Jr., president of California Waterfowl Association, a nonprofit organization that restores and enhances wetlands and other waterfowl habitat. “Birds traditionally stop at this historically important habitat to refuel and rest before finishing their thousands of miles trip to their wintering grounds.”

Because of lack of any flooded habitat or irrigated grain crops, the refuges will for the first time be closed to all waterfowl hunting for the 2022-23 season. This will not only negatively impact outdoor recreation opportunities for many California and Oregon families, but also harm the Klamath Basin’s local economy, which depends in part upon hunting-related revenues.
A water sharing compact, the Klamath Basin Restoration Agreement, would have provided more equitable supplies of water to the refuges and was supported by a large group of stakeholders, but Congress failed to pass legislation to implement it by the 2016 deadline. Subsequent efforts to create a similar agreement with Klamath Basin water users—which many critics view as necessary—have largely stalled.

AN INNOVATIVE STEP FORWARD
Purchasing permanent water rights from willing sellers is one of the very few remaining options which would also help to address and mitigate this crisis over the long-term. By working with the U.S. Fish and Wildlife Service, California Waterfowl Association facilitated a water transfer of up to 3,750 acre-feet that delivered almost 400 acre-feet of water to Lower Klamath NWR this summer. This was the only wetland water delivery at that time to either refuge, and was accomplished with water quality benefits to endangered fish in Upper Klamath Lake while not harming agricultural water users.

Funding for the transfer was initially provided by private donations from CWA members in 2021, while the California Department of Fish and Wildlife allocated state drought-related monies for this year’s water delivery. This transfer is supported by many other conservation groups, sportsmen’s organizations, and some farming and tribal interests--representing one of the few collaborative efforts among multiple private groups and government agencies to acquire water for the refuges.

With additional funding in the next couple years, the transfer will be made permanent and is expected to provide water to Lower Klamath NWR in most, if not all, future water years. According to an Environmental Assessment completed by the U.S. Fish and Wildlife Service in 2021, up to 30,000 acre-feet of water is available for permanent transfer to Lower Klamath NWR from willing landowners in Oregon. This would be enough water to flood 10,000 acres of wetlands. “CWA is working towards this lofty but attainable goal!” said Carlson.

For more information, visit our plan to help save Klamath at calwaterfowl.org/lower-klamath.