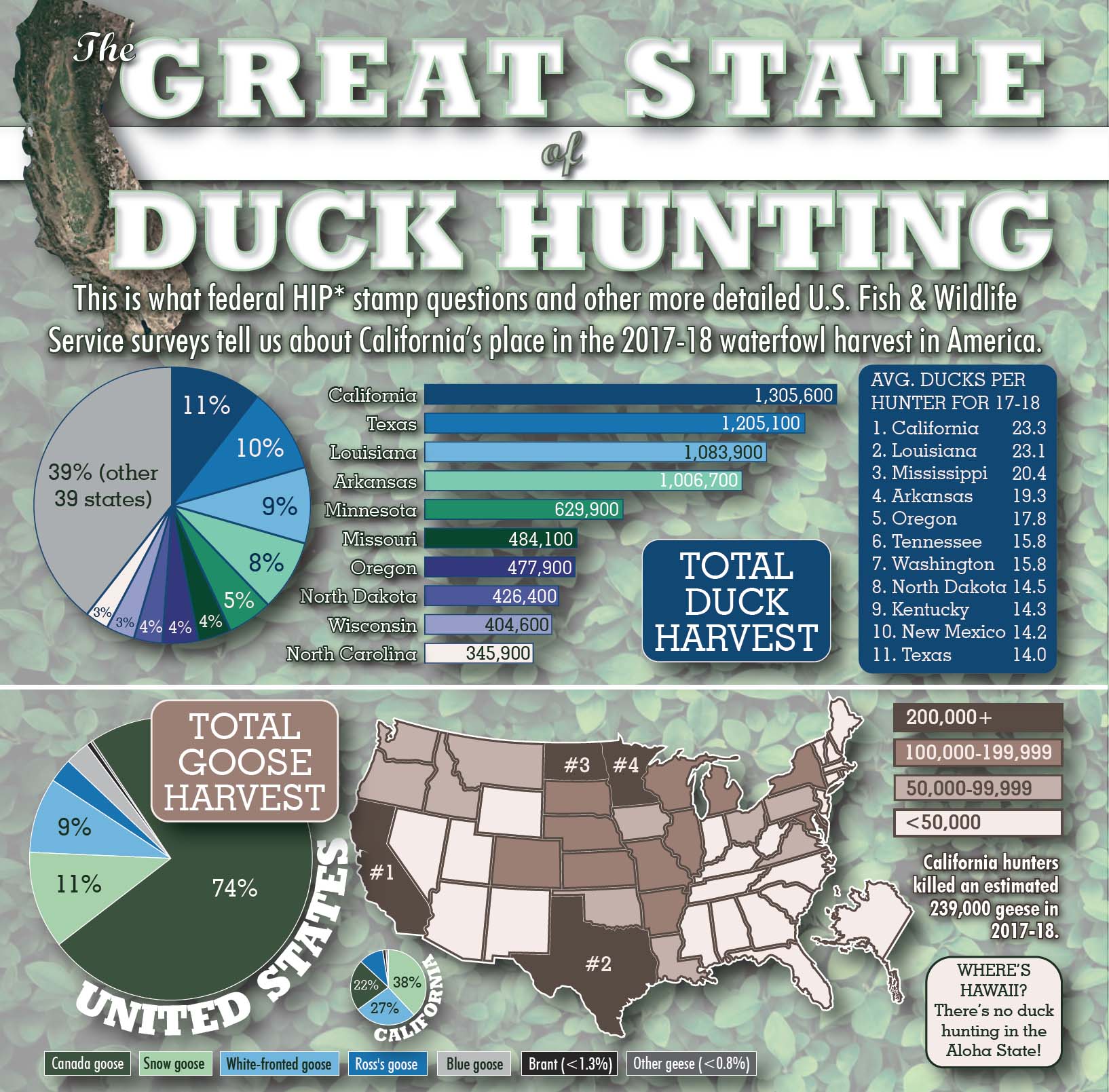 HIP: Why that validation on your hunting license matters a LOT 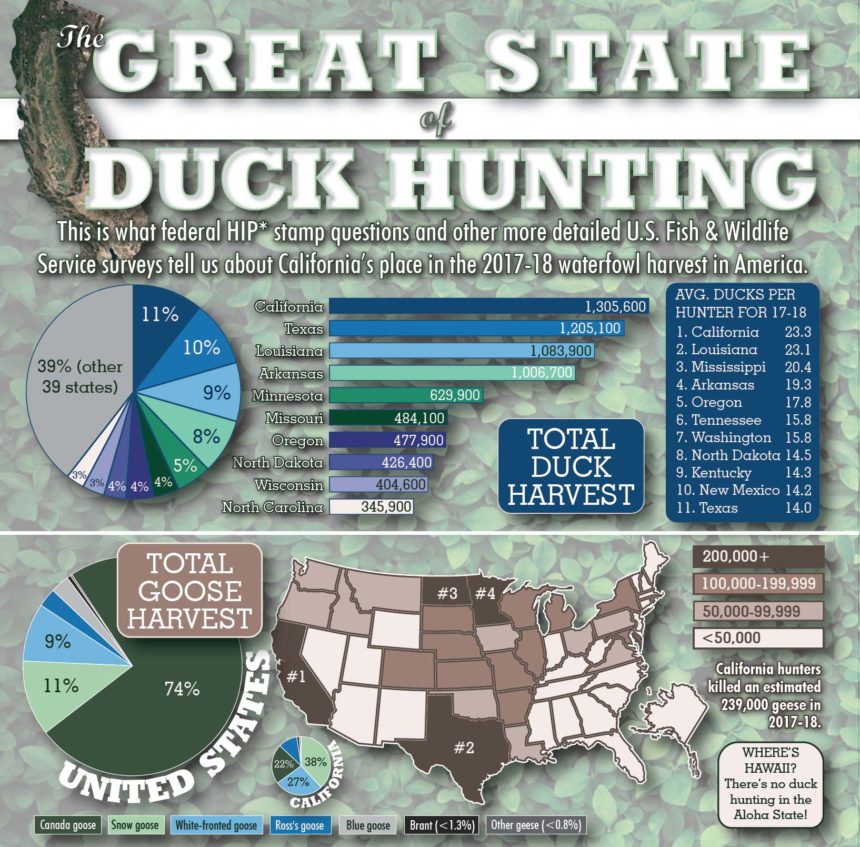 The federal Harvest Information Program yields all kinds of cool data, but it's good for more than just bragging rights. Click image to see full-size (excerpted from California Waterfowl Spring 2019).

A lot of things in life can be complicated. Like taxes and fuel-injected car engines. Fortunately for those hunters who pursue migratory game birds each fall, the Harvest Information Program, or HIP, needn’t be on this list of complications. HIP? What’s that? Glad you asked.

Skip to:
What is HIP?
Who needs to be HIP-certified?
What does it a cost?
What is the national harvest survey?
What is HIP's biggest challenge?
See the latest data (PDF)
Interactive look at data

“Our waterfowl management system is designed on the premise that bird populations are and will continue to be sustainable,” said Jake Messerli, chief operating officer of California Waterfowl. “HIP is an information-gathering tool that helps ensure we’re acting responsibly to steward a precious public resource that we all care so much about.”

Introduced initially as a pilot test in 1992 in California, Missouri, and South Dakota, HIP became a national requirement for people hunting migratory birds in 1998.

“HIP is a program that allows biologists to estimate how many migratory birds, e.g. ducks, geese, and doves, hunters harvest in this country each year,” said Dr. Karen Waldrop, chief conservation officer for Ducks Unlimited. “It also tells us how many people are participating in hunting these species.”

HIP is a cooperative partnership between the U.S. Fish and Wildlife Service and the state game agencies, in which two important pieces of questions are answered: One, who are the nation’s migratory bird hunters? And two, what types of migratory birds do these individuals pursue? Note the emphasis on migratory bird hunters, not exclusively waterfowl hunters. We’ll get to that distinction in a minute.

But getting HIP-certified is only step one in a potentially two-step process. Potentially, because not every migratory bird hunter will progress to the second step, that being a much more in-depth harvest survey distributed by the USFWS. Key word here – harvest. While HIP tells the states and the USFWS who the hunters are and what they hunt, for example, ducks, coots, swans, snipe, or doves, to name but some, the in-depth survey provides accurate harvest information, like how many, where and what species.

Who needs to be HIP-certified?

That’s HIP in a nutshell. Now, who needs to sign up? This one’s simple – every hunter who pursues migratory birds must sign up for HIP. Who collects this information? How is it obtained? We’ll get to that momentarily, but for now, let’s define migratory birds.

Migratory birds. Does this mean only ducks, and geese? HIP, perhaps incorrectly, has become associated more closely with waterfowl hunters; however, the program applies to much more. The USFWS definition of migratory game birds includes any species of migratory birds, including ducks, geese, swans, brant, coots, doves, woodcock, rails, snipe, sandhill cranes, moorhens, band-tailed pigeons, and gallinules, for which there is a set season and which are hunted.

But…wait. If I only hunt ducks and geese – no snipe or rails, no moorhens or gallinules – why is it that I have to answer questions about those species? “(The USFWS needs) to be able to contact people who hunt various birds,” said Dr. Frank Rohwer, president and chief scientist of Delta Waterfowl. “What this does is it narrows the field, and allows the USFWS to ask more detailed questions about what was harvested. They can even ask hunters to send in wings to help determine age, sex, and other important data.”

One more note. Once HIP certification is complete, proof of that completion must be carried with the hunter in the field, and, like a hunting or fishing license, must be presented to a wildlife officer, either state or USFWS, upon their request. This proof of completion varies from state to state, and it’s the responsibility of the hunter to make sure he or she (1) is HIP-certified, and (2) possesses the necessary documentation while afield.

Who collects this information? When? Is there a cost?

Today, HIP information is gathered in a variety of ways, depending upon the state where HIP is completed. Often, this process is conducted either at the time a hunting license is purchased at a store, online, or via a state-specific toll-free telephone number following the purchase of a hunting license. At the license counter, the license agent should ask the HIP questions as part of the licensing process; if he or she does not, inquire as to the state requirements regarding HIP. “I usually buy my hunting license at a big box store, and I’ll call them out,” said Rohwer, without hesitation. “I’ll say, ‘Hey, I just got HIP-certified, and you didn’t ask me any of the questions. I know there are questions and I want to answer them because I want to be a responsible hunter.”

It’s worth noting that unlike the Federal Duck Stamp, which is good in all 49 states where duck hunting is allowed, you need a separate HIP certification in each state where you hunt migratory birds. When you answer the questions to receive that certification, your answers should pertain to migratory bird hunting you did (or didn’t do) in that state the previous season, not a total for all of your hunting.

As for cost, the answer is yes or no. In some states, California being one of them, HIP certification comes free or as part of the license purchase price; others, like New Jersey, charge a nominal fee designed to cover any administrative costs. Any cost, then, depends entirely on the state that issues the hunting license and HIP certification.

What is this "national harvest survey," and why is it important?

HIP certification is only the first piece of the puzzle. The next step of this two-step process is just as basic. The names of every HIP-certified hunter in a state are placed into a general pool. The computerized equivalent of a spinning drum, so to speak. From this single drum or pool, a small number of hunters’ names are selected at random each year, and these individuals are asked to complete a much more in-depth survey; that is, the national harvest survey. Think of it like winning the lottery. These surveys are broken down into five separate categories: waterfowl (ducks, geese, sea ducks and brant); doves and band-tailed pigeons; American woodcock; snipe, rails, gallinules and coots; and sandhill cranes. Responses to the HIP questions allow the proper survey to go to the appropriate hunter; that is, duck hunters receive duck surveys, dove hunters receive dove surveys, and so on. It’s important to note, however, that the occasional duck hunter might receive a dove survey, or vice versa, in order to try to sample hunters who have switched from one to the other.

The national harvest survey asks hunters to maintain a voluntary hunting record throughout the course of the hunting season. Think of it as a hunting journal or diary. For example, our Hunter X, now known to be a duck hunter by virtue of his HIP responses, will provide information that includes the date, county of harvest, and number of ducks or geese harvested, including any birds downed but not retrieved.

There is a third step to the process, known as the Parts Collection Survey, or more commonly, the Wing Survey. A still smaller subset of hunters will be asked to provide one wing from each duck, or the tail feathers of each goose, harvested during the season. With these, researchers can determine species, sex, and age for birds harvested, as well as other limited information for migratory bird species. This gives managers important indications of the health of bird populations in addition to determining how many are harvested – information that is used, with other data, to establish seasons and limits that ensure hunting does not harm migratory bird populations.

Is accurate data THAT important?

There’s a saying in the computer world – “Garbage In. Garbage Out.” – meaning one gets out of the machinery only what one puts in. Enter inaccurate information, and, no surprise, the information received as a result is likewise erroneous. Similarly, wildlife managers stress the importance of having accurate HIP data in order to build upon that foundation. “We use the information we get to estimate harvest,” said Dr. Kathy Fleming, chief of the Branch of Data Management and Monitoring with the USFWS. “Those estimates are very dependent on the data we get and the size of those samples, so not only do we get an estimate but we want to know how accurate that estimate is.”

And HIP’s biggest challenge in the 21st Century is…?

It’s no secret that wildlife management agencies today are being challenged to do more with less. And as agencies try to be more responsive to these challenges, HIP faces its own set of trials. “The number of hunters has been declining, and most people are familiar with that fact,” said Fleming. “And HIP is our main source of information as a sample framework for our harvest surveys. Over the past 10 years, (survey) participation has declined across the board. People are inundated with requests to take surveys, so that’s negatively impacted our sample in that we (now) have a smaller number of hunters for our surveys, while we also have a lower response rate from those hunters selected. That’s our number one concern going forward for HIP.”

But what can HIP do for me?

An understandable question often heard is ‘What does HIP mean to me, the individual being asked to participate in this annual series of inquiries?’ “The vast majority of hunters who participate are doing so because they know it’s important,” said Fleming. “They understand why it’s important as hunters. And we view our hunters not just as people answering a survey, but as partners in data collection that directly affects their hunting opportunities. So it’s different from a survey that asks, ‘What did you watch on TV last week?’ We’re actually asking hunters to provide us with scientific data on their harvest.”

But tangible benefits to me, the migratory bird hunter? “I would say there are a lot of benefits to hunters for providing quality information,” continued Fleming. “Hunters and the public want us to make wise decisions about managing migratory birds, and that’s the number one thing we can do with good information.”

A note in closing

Like the migratory bird hunters upon whom it depends, HIP’s story has been one of evolution; a series of modifications and improvements have been made over the course of its history. What hasn’t changed since HIP was introduced nationwide in 1998 is the importance of hunters providing good information. Seasons, bag limits, hunting zones, unique opportunities, and habitat management decisions are all connected to you, the hunter who answers the questions.

“We’ve been in this prolonged period of liberal bird hunting seasons,” said Fleming, “with really good habitat conditions for most species. And I think a lot of hunters don’t know or remember some of the restrictive regulations that were used in the 1970s-90s, so they don’t see the need for getting really good information every year. They think there are a lot of birds and, with fewer and fewer hunters every year, that we don’t need good data. But nothing could be further from the truth! Just because we have liberal seasons now doesn’t mean we can relax our need for information. It’s a very important part of being able to set the season framework and have an entire strategy that lets us know when we have to be conservative and when we can be liberal. But that requires data annually, not just every few years.”

So as responsible hunters, we’re all in this together, and it all starts, each year, with each of us getting HIP certified.