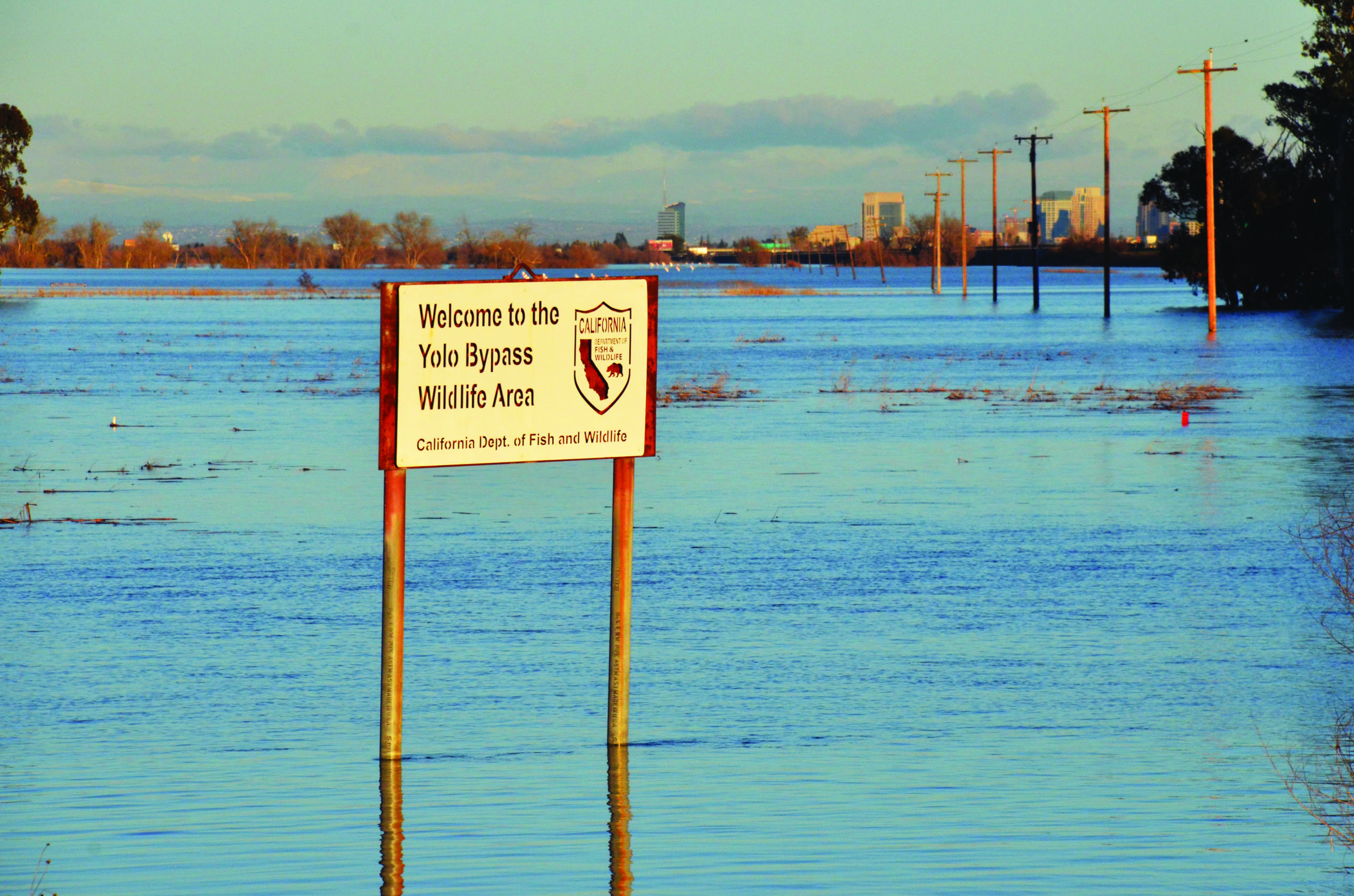 Originally published in the Winter 2019 issue of California Waterfowl. 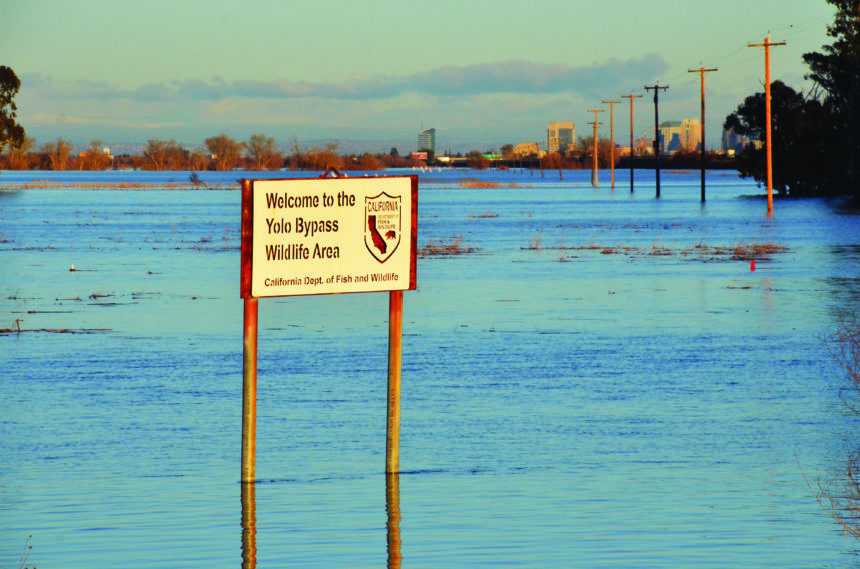 The Yolo Bypass Wildlife Area and duck clubs in the Yolo Bypass could flood more often in the winter under a state plan. PHOTO BY CA DFW

The Yolo Basin is one of California’s historic wetlands. Although it has been reclaimed for farming, mostly rice and row crops, it is allowed to flood in winters when the water in the Sacramento River comes close to overtopping the levees.

Using a series of weirs, or low spots in the levees, the river spills into the Yolo Bypass on the west side of the river. This protects the city of Sacramento from flooding. Driving on Interstate 5 or Interstate 80 when the Bypass is flooded, one travels on an elevated causeway over what appears to be an inland sea.

Though much of the Bypass is farmed, it also includes a number of private duck clubs and the massive Yolo Bypass Wildlife Area, as well as two Type C wildlife areas on the northern end and a permanently flooded ecological reserve on the southern end.

In recent years, scientists have discovered that threatened and endangered salmon thrive when they are allowed onto the historic floodplains. Using rice fields that are flooded in winter to decompose rice straw left standing after the harvest, scientists have shown juvenile salmon that spend time in shallow, warm water receive nutrition that is not available in the colder, deeper river. As a result, they grow much faster and have much higher survival rates than salmon that stay in the mainstream of the river.

For the most part, this “reactivation of the floodplain” is a very good thing. By helping salmon grow big enough to make it out to sea and then return, the concept could lead to recovery of the threatened and endangered runs of salmon. This provides benefits to the salmon fishery, as well as to rice farmers and flood protection agencies. Waterfowl also take advantage of the large amount of wetlands created and the nutritional values of those wetlands.

This discovery prompted state Department of Water Resources and the U.S. Bureau of Reclamation to explore, and this year approve, a plan to reconfigure the Yolo Bypass to make it better habitat for salmon by intentionally flooding it more often: the Yolo Bypass Salmonid Habitat Restoration and Fish Passage Project. The project, scheduled for completion in 2022, will allow extended sporadic flooding in the Yolo Bypass from November through March.

Unfortunately, in the Yolo Bypass, what is good for the fish may not be so good for waterfowl and waterfowl hunters. Longstanding duck clubs may be flooded so deep and so long that they lose much of their hunting opportunity and their value as dabbling duck habitat. And the Yolo Bypass Wildlife Area, which closes when the Bypass is flooded, will end up off limits to hunters more often.

The plan is to put a gated “notch” in the Fremont Weir at the north end of the bypass. The Fremont Weir is located near Knights Landing, north of the town of Woodland and the Sacramento International Airport. It is about 1.8 miles long, and the river overtops the weir when it reaches the 32-foot elevation.

When the gates are open, the notch will allow water to run into the Yolo Bypass when it hits the 14-foot elevation, and allow salmon to enter the bypass and reside there until the river drops and the water in the bypass flows out the southern end. For this to work, some work will have to be done at the southern end on the Lisbon Weir. The Lisbon Weir, in its present state, creates some difficulties for salmon seeking to return to the mainstream of the Sacramento River. It also provides a place for predator fish such as striped bass to prey on the juvenile salmon.

Ducks Unlimited was asked to prepare a study of the impacts on waterfowl from the project. They found that the main impact would be the loss of hunting opportunity, which would lead to the loss of maintenance of waterfowl habitat at clubs in the lower bypass.

The 16,600-acre Yolo Bypass Wildlife Area – which provided the third most hunting opportunity of all Type A and B refuges in the state last season, after Mendota and Gray Lodge – will see more closures due to flooding. The wildlife area closes during flooding, as well as after flooding stops to let the area drain and dry, because shallow flooded roads are often right next to very deep canals and ditches, and it is impossible to see where the road ends and the ditch begins.

A project analysis concluded that if this project had been in place from 1997 through 2012, there would have been 90% more wildlife area closure days in December and 62% more in January, on average. For context, Yolo provided nearly 4,000 hunting opportunities in December and January last season, but only 2,400 in the 2016-17 season, when flooding resulted in lengthy closures.

In nearly half of those years, the analysis concluded the fish passage project would not have led to any closures in December and January. But it would have added new closures in three of those years and extended them in six – in one year by 230%.

The only mitigation measures planned so far are adding access to the wildlife area on its west/southwest side, which does not help if the area continues to close completely while inundated, and improving drainage structures so the area can reopen more quickly after flooding.

In addition to affecting access for hunting on public and private land, deeper water during floods will deprive waterfowl of food resources, and may lead to changes in the mix of plant species, which could affect the overall habitat value of managed wetlands in the Bypass.

In several years of study and public meetings, California Waterfowl has participated in many meetings, along with duck club owners, and has consistently asked, “How are you going to prevent the waterfowl habitat from being impacted by the additional flooding?”

The answers have been various, including, “Nobody who does not want to be flooded will be flooded.” This answer is negated by looking at the maps of where flooding will occur. Only major levees will prevent duck clubs from being flooded in the southern end of the bypass.

The environmental impact report finds no impact to waterfowl, because waterfowl can simply go elsewhere. This ignores the habitat value of the duck clubs and wildlife area.

So far, the state and federal government agencies have refused to directly address the concerns of the duck club owners and California Waterfowl. They have said they will work out those concerns as they proceed with the project.

As the project progresses, the duck club owners may have claims against the governments for the taking of their properties for public purposes. However, another increment of California’s few remaining wetland acres will be lost.

On the whole, though, the Yolo Bypass Project is one more example of how the state and federal governments will invest in waterfowl habitat in some instances, but then sacrifice it when another purpose arises. This is demonstrated again and again through issues such as the high-speed rail route through the Grasslands Ecological Area, or the loss of a water supply on the Lower Klamath National Wildlife Refuge due to protections for endangered fish species, or the encroachment of new housing and commercial developments on the San Jacinto Wildlife Area.

California Waterfowl’s greatest challenges are in defending the state’s remaining wetlands from other uses. The state and federal governments need to grasp the concept that waterfowl habitat is essential to a balanced ecosystem that assures the recovery of threatened and endangered species and provides thriving populations of all wetland-dependent species.

Click here for information about the Yolo Bypass Salmonid Habitat Restoration and Fish Passage. The website includes a data viewer that shows how the project would have affected individual parcels 1997 through 2012.

CWA will post updates in this situation to our Current Issues website. If you would like more information about the Yolo Bypass Salmonid Habitat Restoration and Fish Passage Project, or if you have information to share about the Project, contact Jeffrey Volberg at jvolberg@calwaterfowl.org or 916-217-5117.