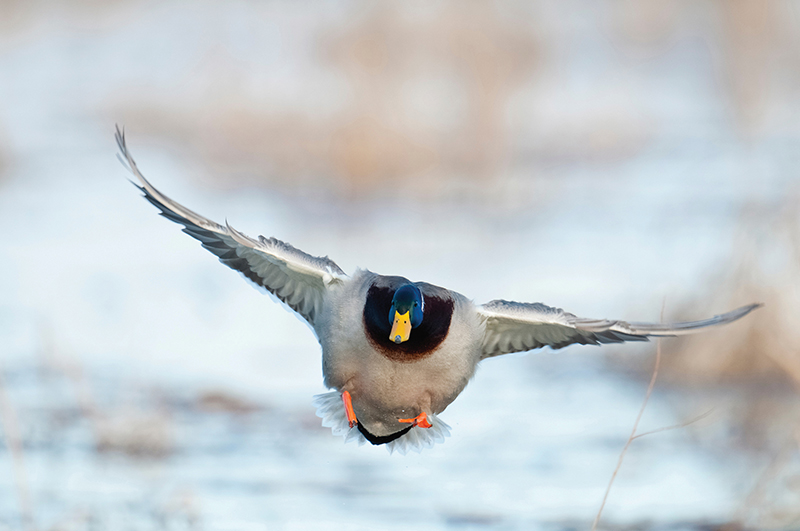 Habitat conditions and weather were mixed across breeding locations. PHOTO BY DAVID STIMAC

(Originally published in the Fall 2020 issue of California Waterfowl)

Postpone. Delay. Cancel. You’re likely accustomed to hearing those words by now. Due to the COVID-19 pandemic, waterfowl population data collected through annual surveys and banding on northern breeding grounds did not take place this year. They were canceled due to stay-at-home orders and border closings.

Unfortunately, that’s the data we usually use to forecast the fall flight. So, without it, we did the next best thing: We reached out to a vast network of biologists and land managers to ask them what they were seeing on breeding grounds from California to the Arctic.

In brief: Conditions in 2020 ranged from poor to excellent.

Below, we’ll review important areas that send ducks our way each year. Keep in mind that even when we have survey results, it’s difficult to predict the hunting season because weather plays a large role in daily movements, migration and ultimately hunter success. 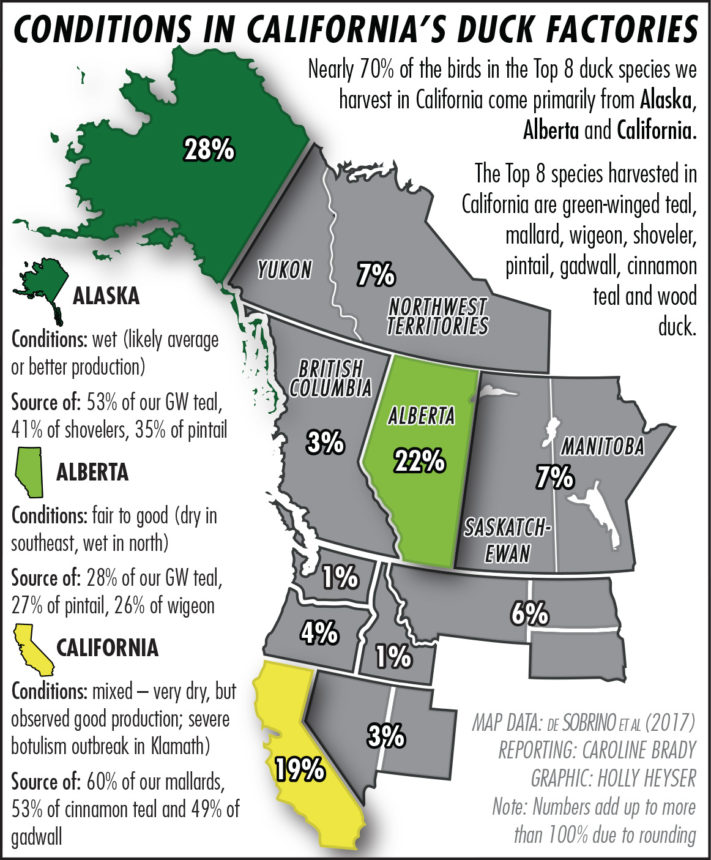 The most important thing to note is that 2020 was one of the driest years here in recent history. We had an arid winter and the driest February on record. Some regions got a few late-spring rains in May, but that did little for our overall water situation. In the big picture, 2020 was the third-driest year since surveys began in the Sacramento Valley and Grasslands, and the second driest in Northeastern California.

Ducks that breed in California make up 19% of our total harvest, and nearly 85% of all California breeding ducks nest in these three regions. This is not good news for California ducks.

Public-land managers had mixed reports about the breeding ducks and broods they were seeing on the landscape.

The pleasant spring temperatures we experienced throughout California this year were good for nesting ducks, too. Long stretches of high temperatures can kill embryos and reduce hatch success. Fortunately, we did not have 100-degree heat waves until late June, after peak hatch.

Although the California 2018 and 2019 breeding duck surveys were lackluster, they showed incremental progress back toward the long-term average. The increased number of hens that nested in 2018 and 2019 and survived the duck season likely returned this year, along with their female offspring, to produce even more ducks.

However, this kind of population growth also depends on nesting habitat conditions in April through June, brood-rearing success June through August and molting survival in July and August.

Cultivated rice fields provide the majority of summer water for ducks in the Sac Valley, but quality nesting habitat is scarce. CWA’s Egg Salvage Program rescues duck nests from agricultural fields prior to harvest and this helps us assess breeding activity in ag lands. The mild February allowed farmers to cut and incorporate cover crops, like vetch, much earlier. Unfortunately, that resulted in reduced nesting cover for early breeders. Despite the early spring, nesting appeared to start on time here.

Biologists and volunteers with CWA’s new Delayed Wheat Harvest Incentive Program reported that fields were highly productive, especially in rice country. Of particular interest, this July CWA recorded the first salvaged mallard nests from a wheat field after it was harvested, in standing straw. This indicates those hens planned to sit on nests until mid-August to fledge their ducklings by late September. Both of these programs revealed multiple nest attempts that lasted late into the nesting season – a good sign.

We depend on this region for 39% of the mallards we shoot. Spring conditions were fair to good, followed by poor summer conditions, including an early, intense botulism outbreak this summer.

John Vradenburg, supervisory biologist for the Klamath Basin National Wildlife Refuge Complex, reported in July that there were thousands of molting adults and ducklings on the landscape. CWA's banding crew saw this, too, and were on track this summer to band more than 5,000 birds in five weeks.

Unfortunately, all the effort put forth by these birds may be for naught: By early summer, wetland units were evaporating. There was only enough water coming in to keep Unit 2 flooded. That could cause a banner production year to crash if there’s overcrowding in the remaining wetlands and the botulism outbreak persists. So, it’s unclear how many ducks will come out of Northeastern this year. (Read more about CWA's efforts for the Klamath refuges here.)

The Grasslands hosts 15% of our breeding mallards and a large percent of California’s other resident breeders (cinnamons and gaddies). Habitat conditions here were similar to the Northern Sac Valley. Nesting habitat is in abundance, but summer water is dependent on public and private land managers to take action. Luckily a large portion of this year’s participants in the Presley Program, which rewards landowners for using certain management practices like providing brood water, were located in the Grasslands. Sean Brophy, assistant refuge manager at San Luis NWRC said the east-side bypass, which runs through the western edge of the Merced NWR, was holding a steady volume of water into July. That gave molting ducks and broods a place to go once wetland drawdowns began. Brophy said that he observed several broods of various ages, which suggests multiple nest attempts by hens in the area. 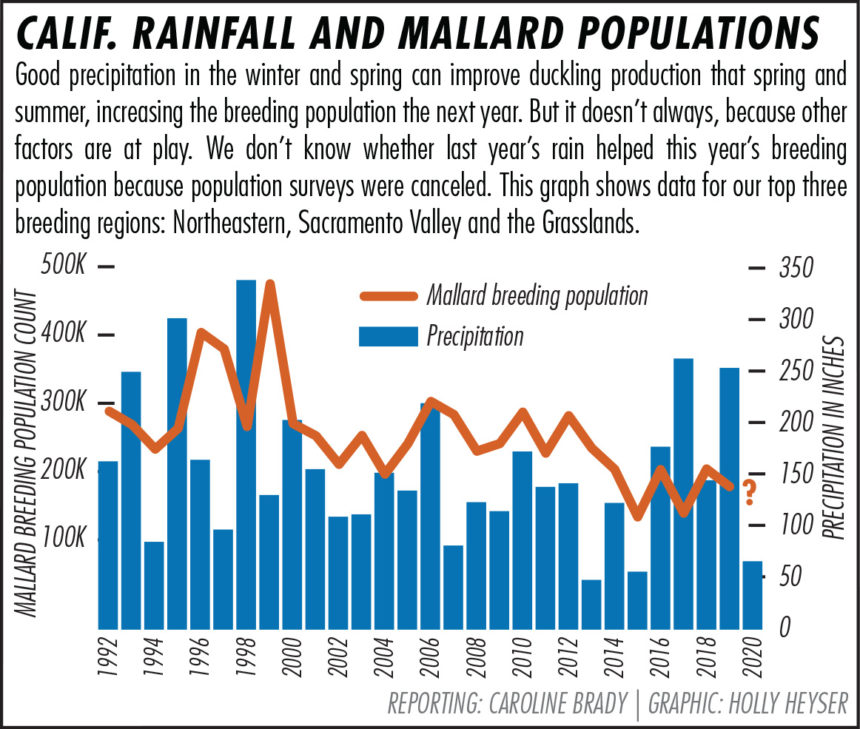 Alaska grows 28% of the ducks that make up the vast majority of our bag in California – it’s our No. 1 source of dabblers!

Alaska started off with plenty of water from snowpack, and some areas experienced summer flooding. Alaska is extensive and largely undeveloped, so knowing it’s wet over much of the state is half the battle. Jason Schamber, the state waterfowl coordinator, said production was likely average or better, but there is little data to flesh out that projection.

Habitat conditions in prairie Canada were mixed this year, and that could be a problem because it provides a substantial proportion of California hunters’ mixed bags each season. Combined, the Canadian prairies and Boreal Forest (Alberta, Saskatchewan and Manitoba) support 29% of all dabbling ducks that we shoot. Alberta grows 27% of our pintails, Saskatchewan 19%.

The Saskatchewan prairies weathered their fourth year of drought. Habitat conditions were poor, and duck production there will likely be low. The Boreal Forest reported good to excellent conditions. North-Central Saskatchewan (Saskatoon and northward) had better luck with water in most of its large wetlands this spring. Wetland conditions in Manitoba were good. In early July, western Manitoba’s wetlands were full. Among the three provinces, Alberta is the heavy lifter. It sends 22% of the ducks we harvest, and conditions in Alberta ranged from fair to good. The southeast was parched, but areas north of Edmonton were very wet.

Garnet Raven, the province’s waterfowl biologist, reported that counties north of Edmonton declared a state of agricultural disaster due to high water levels. “Most wetlands were full to the brim in May through to August,” he said.

However, this may have had a negative impact on young broods that are unable to thermoregulate due to the cool, wet conditions. Luckily, pintails are the earliest dabbling duck nesters, so their broods were likely old enough to survive. Overall, production is expected to be good in most of the province. That’s good news for California hunters.

Canada geese in California are flourishing! In Northeastern California, large family units dominate the drying wetland units at the Lower Klamath National Wildlife Refuge – and regularly hold up traffic on Stateline Road. They’re also able to take advantage of all the new growth sprouting out of the recently drained Sump 1B at the Tule Lake National Wildlife Refuge. Sump 1B was last drained in 2009, so this is long overdue, because draining stimulates the growth of preferred waterfowl food plants. Expect it to be a smartweed jungle this fall.

Unfortunately, due to COVID-19 halting most Arctic goose research and banding, we have little data on the geese that dominate our bags: specks and snows. Based on mean May and June temperatures, it was a late spring in the subarctic and over much of the eastern Arctic, similar to 2018, which was a total bust.

In Canada, Frank Baldwin, wildlife biologist with the Canadian Wildlife Service, said that based on weather in Cambridge Bay and Gjoa Haven, the central Arctic does not look quite as late, but likely still a little delayed. Based on the limited information, Baldwin suspects it will be a below-average production year for white geese. But keep in mind that is an educated guess because it is a massive area of land.

Enough with the bad news. Let's end on a positive note. One Arctic location reported a strong breeding population of snow geese.

Russian biologist Vasiliy Baranyuk said that there were excellent breeding conditions this summer for snow geese on Wrangel Island. The autumn number is estimated at 1 million birds, according to data collected on the remote island north of Russia. Guess where most of these birds will fly to this fall? Yep. California.

So what does this all mean for your season? I usually tell you, “Well, that’s hard to say,” and that goes double for this year with COVID-19 throwing a wrench in all the research that usually gives us solid, factual indicators.

How your season goes depends on the size of the breeding population, the habitat conditions in breeding areas, the number of ducklings produced, the number of adults that survive the molt (and, for ducks in the Klamath Basin, botulism), the weather here in California during duck season, the quality of your hunting locations and, of course, how well you shoot. Let’s hope we’ll have more data next year.