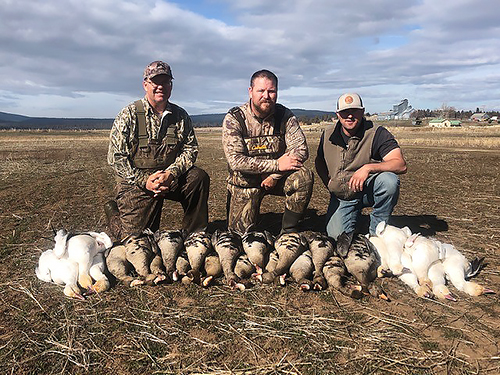 Dispatches from the Veteran Hunt Program: A fair-weather 'snows storm'!

We expected 2 feet of snow, blowing winds and miserable late-season conditions. After all, it was February, and that’s what we got last year. But Mother Nature delivered 65 degrees, no wind and no snow. This was definitely not a repeat of last year’s arctic conditions. Instead of busting through ice and snow to get to the pit blind, we drove our trucks and decoy trailers into the field. Dang, this was a whole lot easier! We put out our full-body spread and settled into our pit blind to wait for dawn’s early light. Still dark, the specks and snows that were roosted across the ranch began to fill the air. Their chorus warned us that there might yet be a "snows storm" on this warm day.

We were hunting the late white and white-fronted goose season. The unusually warm weather had pushed a lot of geese into the Fall River Valley to the north. Still, we were hoping to fool them with our mixture of full-body snow and speck decoys set out in family groups. This late in the season, geese had been shot at for over five months and were extremely wary of decoys.

Finally, as the light broke through, the big crescendo of “lift off” from the geese filled the morning air.

Marine Corp veteran Tanner Langley held down the southern sector of fire. Debois, of the 82nd Airborne, anchored the northern corner. I was in the middle of the pit, waiting for the “take ’em” order.

Swarm after swarm of snows came our way, circled, cupped their wings at 60 yards and then decided to continue on. However, throughout the morning, a number of geese made the mistake of coming in for a closer look. They were greeted with a fusillade. Fortunately for me, Tanner and Scott can shoot, and we quickly piled up the geese. I always seemed to be looking in the wrong direction, or getting tangled up with the blind or aiming at a goose that dropped before I pulled the trigger. It was a good thing we didn’t have to rely on my shooting. But after a couple of hours, the switch was flipped and not a goose was flying.

That afternoon we returned to the blind and hoped for a repeat of the morning snows storm. We found the action we were looking for. Unfortunately, it was across the field. But what a show! From far away, we saw hundreds of geese drop into their spread across the field. We waited for the “boom” of the shotguns. But first, we saw geese fall out of the sky for seemingly no reason. And then the sound of shotguns firing in the distance reached our blind. Those guys hadn’t fired a shot all morning, but they sure enjoyed their own snows storm in the afternoon.

As the sun set, the geese returned to their roost. Another great late-season goose hunt at the Lookout Ranch was in the books.

The 10,000-acre Lookout Ranch in Lookout, Ca., is a privately held ranch that holds thousands of geese. The owner graciously offered his ranch for a Veteran Hunt, and we are extremely excited to offer this opportunity two veterans, Tanner Langley and Scott DeBois.

The Veteran Hunt Program promotes wellness through outdoor healing and the camaraderie of fellow veterans. Veterans can apply for the many hunts, fishing trips and other outings. CWA coordinates all hunt details and supplies food and lodging, shotgun shells, guns, jackets, gear bags, duck calls, shirts, hats and more to all participants. Hunts are free and are limited to veterans. For more information, click here.