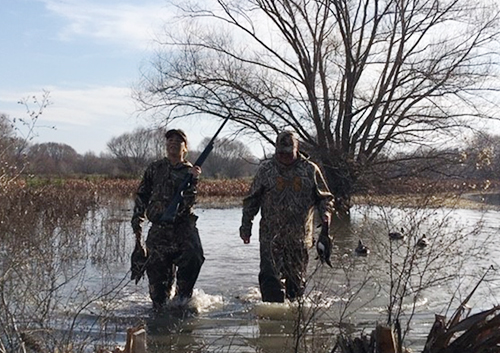 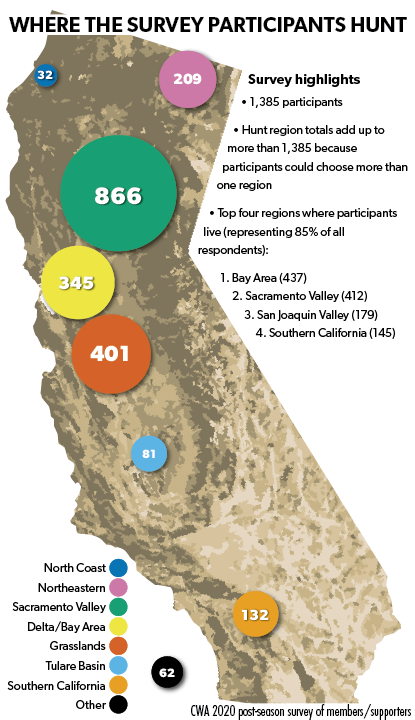 Nearly three out of four California Waterfowl members and supporters said in a survey last month that they liked having an extra five days of duck hunting in the 2020-21 season – a change that CWA fought for.

But there was less consensus about a key issue in the Balance of State Zone: whether those days should also include goose hunting, which would reduce or eliminate that zone’s late goose season in February. People who want to keep a separate late goose season outnumbered those who wanted duck and geese open concurrently for all 105 days by just a five-to-four ratio. (Skip to detailed results.)

Refuges aren't open for the late goose season, which reduces hunting opportunity. But for those who hunt with guides or have access to private land, the hunting can be quite good because the birds have gotten a break from hunters.

In another key result, 30% of respondents said they harvested more birds this year than the previous season, but 46% said they got fewer birds. (Skip to this result.)

Among those who left additional comments, about two dozen – one in ten – said it was either their worst season ever, or one of the worst. "My worst season ever," one wrote. "I killed more ducks when I was 8 years old."

Two respondents said it was one of their best seasons ever.

CWA conducts its End of Season Survey to gauge opinions about current issues and to learn about hunters' experiences each year. Survey results were shared with CWA's Regulations and Traditions Committee last week, and the organization's advocacy team uses the survey results when seeking policy or regulatory changes.

This survey was distributed through email and social media, with results collected online.

What region of the state do you live in?

What regions of the state do you hunt waterfowl in? (Check all that apply)

Where did you hunt waterfowl during the 2019-20 season?

If applicable, check all types of private land you hunted on:

Was your 2019-20 waterfowl harvest higher or lower than the previous season?

How many times did you hunt with licensed guides in California in 2019-20?

What other kinds of game do you hunt?

Note: Check out our Regulations page to see the proposed regs for 2020-21. The Fish and Game Commission is set to vote on the regulations April 16.

When it is possible to get an additional five days of duck hunting, which happens only every few years (the next time will be the 2024-25 season), what is your preference for the timing of these seasons?

When the possible additional duck hunting days total less than five, what is your preference for the late goose season?

Continue offering a five-day late speck/white goose season in February, and the additional days of regular season will be for ducks only: 42.5%

Allow speck/white goose hunting through the end of reg. duck season, & shorten late goose accordingly, e.g., if there is 1 extra day of duck hunting on Monday Jan. 31 in 2022, also allow speck/snow hunting that day and then have a 4 day late goose in Feb: 47.0%

In your opinion, were the extra 5 duck hunting days (through January 31) included for the past season for the Balance of State, Southern San Joaquin and Southern California Zones worthwhile? In the future should those waterfowl zones accept the extra duck hunt days in late January if the calendar year allows for that possibility?

If the season ending date was moved to January 31 in the Northeastern Zone, would you prefer a 10-day split (mid-season closure) in that zone so that hunting could still start in early October?

(Note: Check out our Pintail page to see what CWA is doing to liberalize pintail limits within the bounds deemed prudent by science.)

Would you support a three-pintail bag limit in exchange for a shorter pintail season?

The Tule Lake NWR Spaced Blind/Sump B draw was changed to 4 p.m. the day before each hunt. Do you prefer the draw the afternoon before the hunt or the morning of the hunt?

Currently, the Tule Lake and Lower Klamath NWRs open to afternoon hunting on the Wed. or Sat. after Dec. 15. Would you like to see that date moved up to Dec. 1?

At Upper Butte Basin Wildlife Area (Howard Slough, Little Dry Creek and Llano Seco) should one person be able to enter the lottery on behalf of other members of his/her hunt party, similar to what is allowed at the Sacramento National Wildlife Refuge Complex?

Should Howard Slough Wildlife Area be open for the post season youth hunt?

Do you support opening the San Joaquin River National Wildlife Refuge for hunting?

Would you support taking two hunt days from the early Canada goose season in the Balance of State Zone and putting them during the opening weekend of the late white/whitefront goose season?

We know getting reservations to hunt Type A and B refuges has become more difficult based DFW draw statistics. How should the refuge managers address this issue?

Should public areas stop refilling earlier, say at 2 pm (rather than 3 p.m.) in order to lessen disturbance to hunters already in the field?

When do you prefer the new federally authorized Veterans and Active Military Personnel Waterfowl Hunting Days to occur (note like youth hunts, the Veterans Days can only occur from two weeks prior to opening weekend to two weeks after closing weekend)?

What are the biggest challenges facing public hunters? (Ranked among 7 choices.)

1: Limited access to optimal habitat areas that are attractive to ducks
2: Hunters setting up too close in free roam areas
2: Water/habitat management on refuges
3: Enforcement of refuge rules/bad hunter behavior
4: Too much sanctuary vs. available hunt acres on refuges
5: No refill opportunities in productive waterfowl areas
5: Significant quota restrictions on refuges