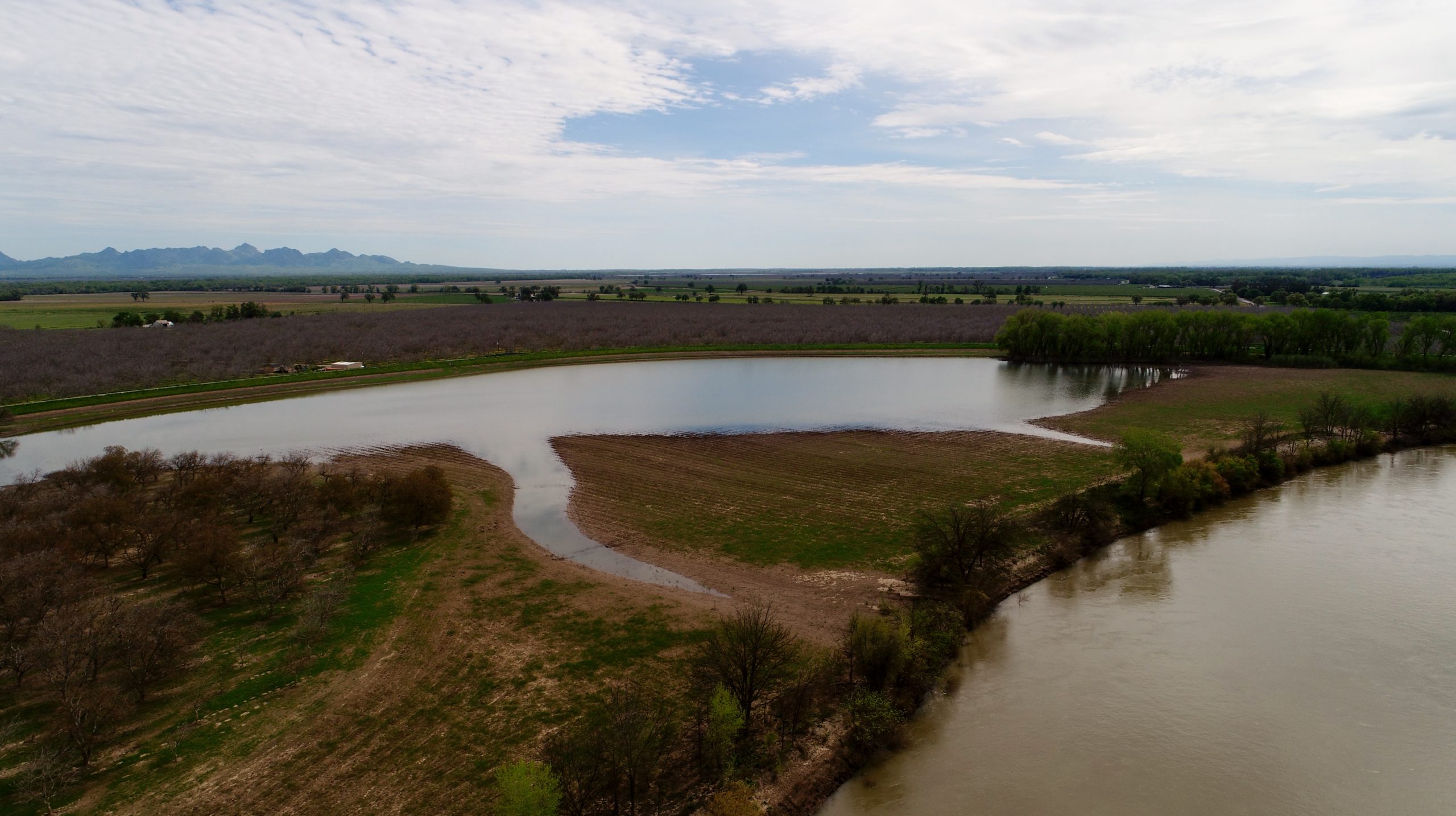 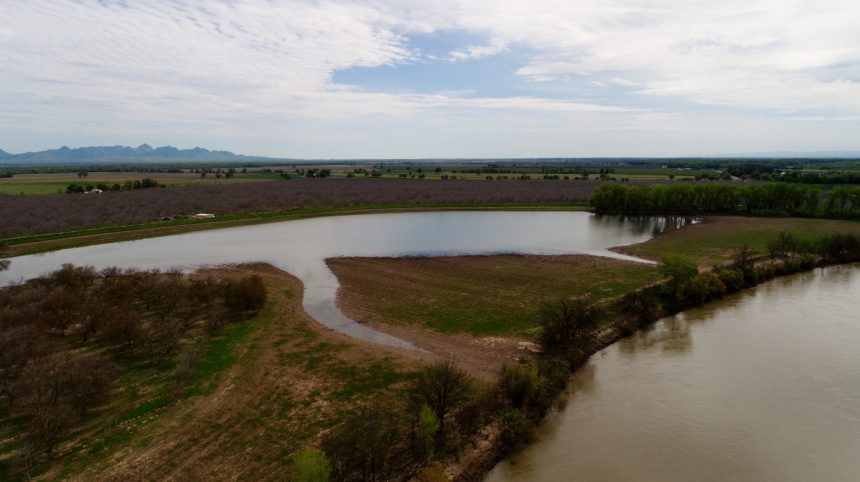 The planned restoration of Willow Bend, a 95-acre parcel on the Sacramento River north of Colusa, is part of a pilot program to show that river-area wetlands are good candidates to receive cap-and-trade credits because of the tremendous amount of carbon pulled from the atmosphere and sequestered in soils and plants. Photo courtesy of River Partners

CWA, River Partners pilot program could open thousands of acres for hunting across the state.

by JAKE MESSERLI, CWA CHIEF OPERATING OFFICER
Wetlands and riparian areas are known for the wildlife habitat they provide as well as controlling damaging floods, and recharging and filtering our groundwater. What many don’t know is that wetlands, when properly managed, also sequester carbon — and a lot of it.

Simply put, carbon sequestration is the transfer or storage of harmful carbon from the atmosphere to plants and soil. When plants grow, they pull carbon from the air to build their roots, stems and leaves. Scrubbing carbon from the air keeps our environment healthy and ensures the next generation — our kids and grandkids — can continue to enjoy the great outdoors.

Being a bigger part of this greenhouse-gas solution could provide money to landowners who manage habitat for ducks. It costs a lot of money to restore and manage wetland habitat. Water costs money. Controlling weeds costs money. Pumping, maintenance and fuel cost a lot of money as well. With 60% or more of California’s managed wetlands in private ownership, it’s important to help landowners invest in habitat management as costs continue to rise.

One approach is cost-sharing, that is, giving the public the opportunity to help foot the bill. All Californians benefit from the clean air, clean water and increased wildlife that wetlands along rivers, also called riparian lands, provide.

But where will the money come from?

Many state and federal agencies, corporations and foundations are creating programs to incentivize carbon sequestration. Corporations are paying into funds at the direction of government mandates to reduce their carbon footprint, while some companies are voluntarily working to rebalance their environmental impact in the name of sustainability and profitability over the long term. Basically, there’s going to be a lot more investment in carbon sequestration in the coming years. And CWA is looking for ways to make these investments work to further our mission to grow waterfowl populations, wetlands and hunter-conservationist communities.

To that end, California Waterfowl joined with the nonprofit River Partners and the Joseph and Vera Long Foundation to embark on an innovative three-year wetland-restoration project. (Click here to read a River Partners article that discusses this effort.) The goal is to develop a carbon sequestration precedent to give the state’s funding decision-makers evidence of success and to forge a path others could follow. 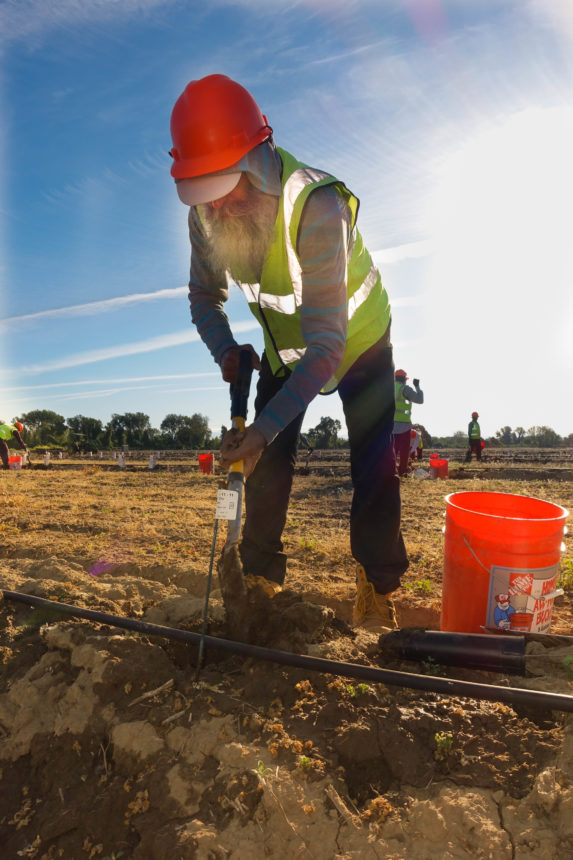 River Partners has restored 16,500 riparian acres since it was founded in 1998, and with their expertise leading the way, our groups are restoring 100 acres of floodplain forest along the Kern River near Bakersfield and another 95 acres along the Sacramento River upstream from Colusa. These projects will help advance carbon science by measuring sequestration at each site and by developing cost-effective methods to measure carbon storage on restored lands. Our ultimate goal is to outline a path for wetland managers and landowners to improve habitat on their lands to benefit wildlife and people in the years to come – and get paid for it!

Many landowners have received grant money under different greenhouse gas mitigation programs, but cap-and-trade credits, also called carbon offsets, have not been awarded for riparian restoration. At least, not yet. The CWA and River Partners project will be a scientific demonstration designed to persuade state leaders to make it easier for floodplain landowners to qualify for carbon and water credits, to incentivize restoration of forests and seasonal wetlands on their properties. Success could open the floodgates, so to speak, to new sources of restoration funding.

Newly restored lands, like their current Willow Bend project, will be opened up to hunters through California Waterfowl’s Hunt Program, and many other parcels could be added to state wildlife areas or federal refuges. River Partners and their allies have restored many of the federal refuge units along the Sacramento and San Joaquin rivers that waterfowlers often use.

The success of this pilot program could mean thousands of acres opened for hunting and other outdoor recreation across the state. California has lost 95% of its historic wetlands. By restoring riparian areas in this new, innovative way, we could return thousands of acres to wetlands, increase hunting opportunities, and expand areas where waterfowl breed, brood, molt, migrate and winter in California.

How does this help hunters? 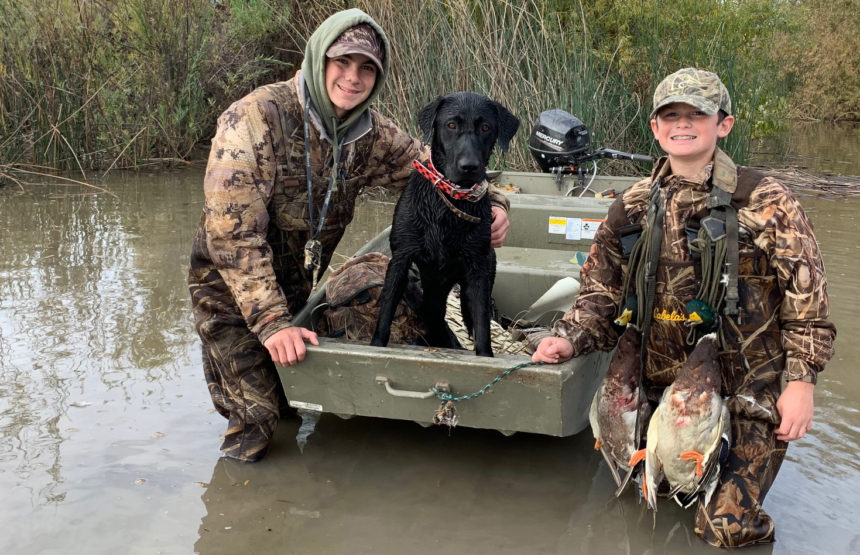 The boys above had the opportunity to hunt Sanborn Slough through the CWA Hunt Program and took a brace of greenheads.

Well, it’s been said that they’re not making any more land, but this program is expected to create more river-area wetlands for California hunters. California Waterfowl recently announced that the Willow Bend property, owned by River Partners, is now open for turkey hunts this spring and deer hunts later in the year through the organization’s Hunt Program, which is opened to the public.

The Hunt Program provides access to 60,000 acres of private land to hunters of all ages and abilities. See calwaterfowl.org/hunt-program for more info. As more riparian areas are restored, such as the 100-acre Panorama Vista Preserve property on the Kern River near Bakersfield, expect more access to be available for recreation.

What is River Partners?

This nonprofit group gives new life to imperiled river landscapes in California. They partner with natural-resource agencies, farmers, private landowners, a variety of community and research partners, and other conservation organizations such as California Waterfowl.

By restoring floodplains and wetlands up and down the state, they’ve increased hunting opportunities and public access in general. River Partners and their allies restored many units in federal refuges that we hunters use all the time. —John Geiger

number of acres River Partners has restored in 2020

acres they restored and are now managed for recreation, such as hunting, since 1998

restored acres given to refuges or wildlife areas for public recreation and hunting.

What about opportunities for landowners right now?

Two main sources make money available to landowners and communities to restore land, and in the process either trap harmful carbon in soils and vegetation or reduce emissions in other ways.

1) Carbon credits, or offsets, are earned through the compliance program of the California Air Resources Board (CARB). Also known as cap-and-trade, credits can be sold and traded in the public marketplace.

2) Grant payments from California Climate Investments through state agencies, such as the Department of Fish and Wildlife (DFW) or the Department of Food and Agriculture, also pay private landowners to improve land or acquire equipment that pollutes less.

Both of these programs are administered through CARB. The first option — carbon credits or offsets — requires a large, long-term investment in data collection, evidence of carbon harvesting and verification by lawyers and third parties. These credits are often earned by large businesses, such as timber companies or operations with extensive agricultural holdings numbering in the hundreds of thousands of acres. The scale and personnel already on staff can help make the projects profitable for these companies. Credits are awarded only after it can be proved that the project reached the desired result. Smaller landholders have a difficult time tying up land for years in hopes of a profit.

River Partners and California Waterfowl are seeking a way to attain carbon credits in their restoration pilot project to make the process more accessible and profitable for smaller landowners. Floodplain restoration is eligible for the carbon credits, but no projects have qualified for credits because of the expenses and complexities of registering, measuring their success and reporting them to the CARB.

The second option — California Climate Investment grants — is much more practical for smaller landowners. Money is distributed through grants from various state agencies, like DFW or local districts. The money is designed to create financial incentives for industries and individuals to develop ways to reduce pollution. Often the agencies distribute money on approval of the project, rather than years after, for practical purchases, such as buying a new fuel-efficient UTV for your duck club or property, or new pumps to transfer water from one area to another. There is no clearinghouse to find what grant would be best for your project, but a good place to start is CARB’s website.

Meanwhile, while CWA, River Partners and the Long Foundation work on paving the way to earn cap-and-trade credits, here are some practical ways private landowners and duck club managers could receive money now to make their business, farm or club more efficient and less polluting.

Carl Moyer Program is administered by the state’s 35 local air districts and makes money available to replace aging engines and vehicles with lower-emission alternatives to help Californians exceed current emissions standards. Moyer was the chief scientist for Acruex Environmental and a foremost proponent of improving the state’s air quality through state incentives. Info at arb.ca.gov/carl-moyer-program-apply.

Partners for Fish and Wildlife is a federal program that gives technical and financial assistance to landowners who are interested in restoring and enhancing habitat. Each project is customized for the land and the landowner, who always retains all ownership during the project. Contact matt_ hamman@fws.gov and see fws.gov/partners.