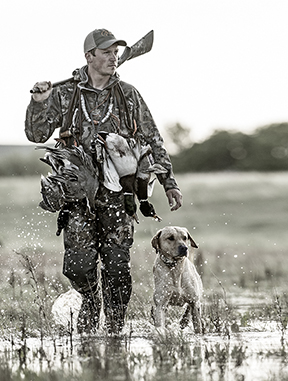 Saying this has been an interesting year would be a complete understatement. Our lives have, without a doubt, changed in many ways. But hopefully you have all been able to make lemonade out of the lemons. Maybe you’ve been able to spend more time with family or less time on the road for work. Many of my friends and clients mentioned that they have spent more time with their dogs. Being stuck at home gave them the time they always wanted to pour into that relationship and training.
I love this for so many reasons, and I am hopeful that all the extra training means that everyone will have a lot more fun and success this season! But since training gun dogs is what I do everyday for a living, I wasn’t able to capture that added benefit of being at home. To be honest, not much changed for me except the fact that I didn’t have people wanting to come over to check in on their dog’s progress in person. This meant I got really good at video chatting!
Talking to people virtually made me see something that is so easy for someone in my profession, and all of us, to take for granted. That is, we sometimes don’t notice how much joy our dogs bring to our lives. When I would update cooped-up people, all they wanted to chat about was the great hunts and amazing retrieves from the previous season. Everyone had time to sit, think, reflect and appreciate those times. I enjoyed listening to the stories, and they got me reflecting a bit on my own season. Let me share a few of my best memories with you.
On an early season timber hunt down in northeast Arkansas, I had with me a dog named Clyde. This was his first hunt, and I didn’t know how this was going to go. He had prepared for this literally his entire life, but I had to go into it with an open mind. Anything could happen. From the second I sat him on that tree stand I could sense an overwhelming feeling of happiness coming from that yellow boy. And as each duck fell to the water, and he got more and more feathers in his mouth, I had never seen a dog so happy, so fulfilled and so at peace. This was truly where he was meant to be, and I will never forget that day and what that moment taught me about life and appreciating the ride.
The second reflection I will share with you is with my boy, Bud, a 2-year-old black British Labrador that I also brought in from overseas at a young age. During his first season in 2018 and 2019, he sat and watched. I wanted him to soak in the experience and confirm he was calm, quiet and steady. Now, in his first real season, he was ready to hit the ground running. I was hunting with Steve Snell, the owner of GunDogSupply.com, a hunting dog expert and aficionado. On day 1, we hunted with my stud, Brock. This yellow Lab is real deal, so naturally I had to show him off on the first hunt. As expected, he was as impressive as ever. The second day I ran Bud. I knew Steve would appreciate a young dog developing with so much promise. But I laid out all the excuses before we hit the blind so that everyone would know that he was a young dog that had never been in this situation before. Well, I didn’t have to worry because Bud handled everything in stride and looked as if he had hunted in that blind for years. After I realized what was unfolding, I stepped back and watched as my young all-star grew up before my very eyes. The last bird of that day was a green-wing teal. It sailed on us big time. After Bud picked up the stoned birds in the decoys, I lined him up for what would be one of the longest blinds he had ever ran. He took that line through the splashing water as perfectly as could be. At some point, I could make out the crippled bird swimming away to the right of where I had lined Bud up. One whistle blast and he snapped around at attention. I gave the right-angled back cast and he took it on a string right to that bird. Once on the bird, it dove. As he worked for it sure enough it would dive again and again and again. The little teal finally popped up in striking distance. Bud made the grab. The blind erupted as if we just watched Michael Jordan hit a buzzer-beater in Game 7. You could see the pride oozing from Bud as he strutted back to us. I am sure I was beaming with as much pride myself. Mr. Snell leaned over to me and said, “He is something special. I can’t want to see him grow up in the years to come.” I couldn’t have said it better myself.
At the end of the day, when we think of those special hunts, we rarely remember the limits or the big wads of birds that finished. Rather we recall the friends we shared those moments with, both two- and four-legged alike.
ABOUT THE AUTHOR
Josh Miller is the field specialist for SportDOG Brand, and owner of . He has more than 13 years of training experience, has numerous successes in AKC/HRC tests and field trials.
Share with Facebook Share with Twitter Share with Email Share with Print