Banner year for banding at CWA 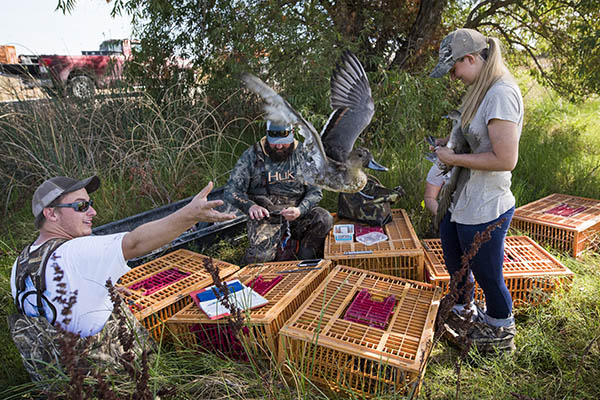 California Waterfowl biologist Jason Coslovich releases a pintail after banding it in late September during preseason banding efforts in the Sacramento Valley.

It was a banner year for the banding crew at California Waterfowl. From the end of 2017-18 season until just before opening day of 2018-19, our team was hard at work across the state banding pintail, mallards and yes, four shovelers. Those efforts led to an all-time high in post-season pintail banding at CWA, along with solid results from our other programs. All told more than 8,300 birds were banded by CWA and our partners in 2018.

Post-season pintail (February-March): As you may have heard, this year’s post-season pintail trapping was one for the record books. Everything just seemed to go our way. The cold and calm conditions we had for most of the season were optimal for trapping, but even when conditions were poor, the birds still cooperated. Cooperation from farmer Mike Felkins, who held spring water in his rice fields longer by delaying drawdown, greatly improved the longevity of our ALL our capture sites. This played a major role in our success. Our crew had a total of 20 net shots, including one net twice in the same day and two nets that got shot six times each throughout the season. In one month, we caught and banded 2,656 pintail, which was double our previous record, along with more than 600 other birds, mostly wigeon.

Wood Duck Program (March-July): The California Wood Duck Program had another great season this year, with a fair amount of habitat available and increased wood duck numbers from production last spring. The late rains and extensive flooding precluded hens from nesting early or from being able to access numerous boxes that were underwater due to spring conditions. Our volunteers and crew banded wood ducks at 58 project sites across the state. Several project managers reported a later-than-normal nesting season, but the lack of flooding allowed for earlier access to boxes at many projects. Over the season, CWA biologists and volunteers banded 425 wood ducks, 50 hooded mergansers, and seven western screech-owls.

Egg Salvage Program (April-August): Much like the Wood Duck Program, our egg salvage season seemed to get off to a slow start. We started the season by searching several prime-looking cover crop fields with little to no success. This was likely due to the delayed access to alfalfa that farmers experienced last year when flooding postponed the first cutting of alfalfa because fields were too wet, so hens had more time to commit to those sites last year before the first harvest. Once farmers started flooding their rice fields, our nest dragging success greatly improved in cover crop fields nearby. The onset of wheat harvest kept our team busy chasing down harvesters and coordinating egg pick-ups from farmers, then shuttling them to our partner hatchery facilities. With the participation of 34 farmers and help from the hatchery managers and volunteers, we were able to band and release 2,149 mallards and more than 200 others.

Summer Banding (June-August): We were fortunate to run two banding crews again this summer, one in the Grasslands and one in the Sacramento Valley. Both crews experienced difficulties similar to last year's. The abundant summer seasonal wetland irrigations kept the birds constantly chasing fresh water (fresh water = fresh food), which made it tough to get the birds committed to our bait-and-trapping sites. The lack of molting (flightless adult) birds in the area where our crews had access was also an issue. In good years most of the birds we band during the summer are molting; lack of suitable molting habitat drove more birds to traditional molting sites in Northeastern California. Despite the tough season our team in the Grasslands managed to band 396 birds, while the Sacramento Valley crew ended up banding 763. We also managed to make it up to Northeastern California to help U.S. Fish and Wildlife Service for two banding events in which we banded 283 mallards, mainly molting adults. All told, the summer banding season ended with 1,455 total birds sporting new legwear, thanks to CWA.

Pre-season pintail (September-October): With the conclusion of summer banding comes the September arrival of pintail, so we pulled out our rocket netting equipment and began setting nets in the Butte Basin. Pre-season trapping is never easy, characterized by skittish and unpredictable birds, and this season was no different. Six net shots later, however, we had met our 500-pintail goal. We even had some time to assist the Department of Fish and Wildlife with its trapping efforts while also netting and collaring 22 white-fronted geese for a U.S. Geological Survey study. With duck season, approaching we wrapped up our field season with a total of 667 birds, including 552 pintail. 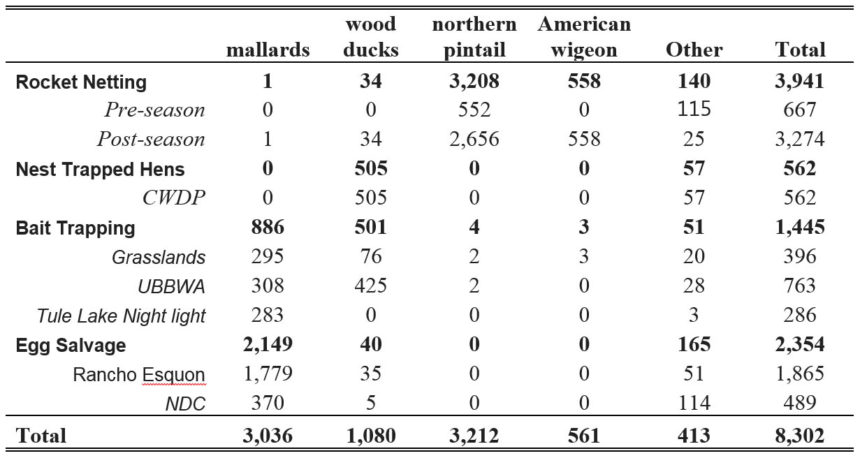 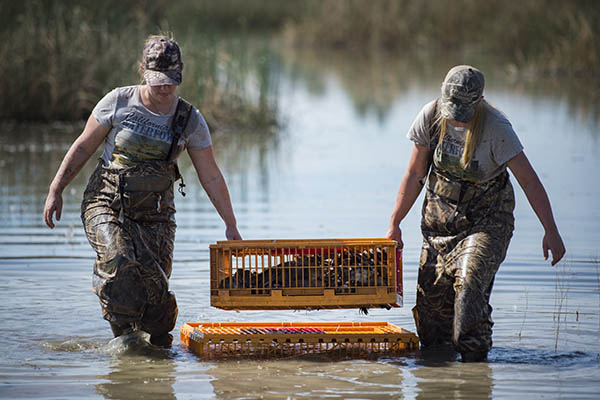