If you’re an avid duck hunter, you know one of the greatest thrills is picking up the bird you just dropped and seeing that flash of silver on its leg. A band is a message in a bottle from another place and time. Some hunters go decades, or even a lifetime, without getting one. 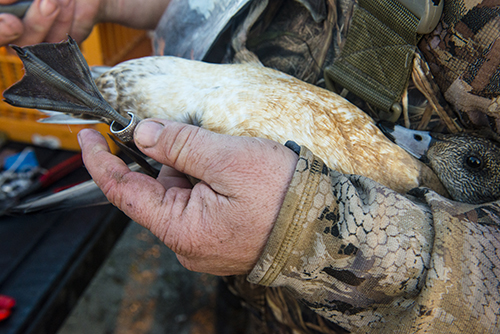 This wigeon has just been fitted with an aluminum leg band for research. 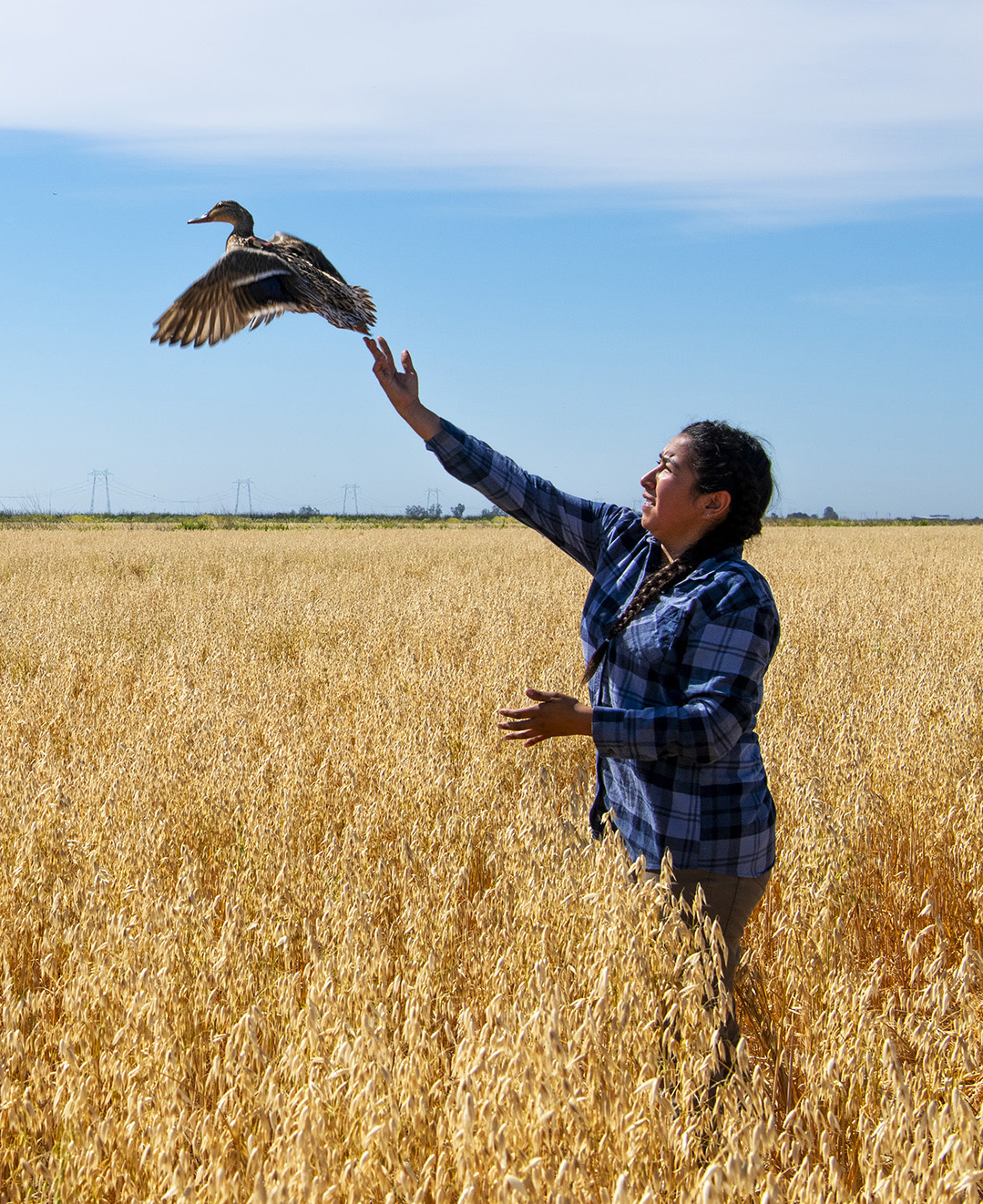 But bands serve a much larger purpose. When you report a band, you are completing a circle for researchers, providing a data point for research that underlies our entire system of sustainable hunting.

It's super important to report bands! You can keep the band; researchers just want the data.

California Waterfowl contributes to waterfowl research by banding as many as 9,000 ducks a year, in part with funding from the California Department of Fish and Wildlife.

Got a bird with more than a band? Don't worry—you're not in trouble! Learn more. 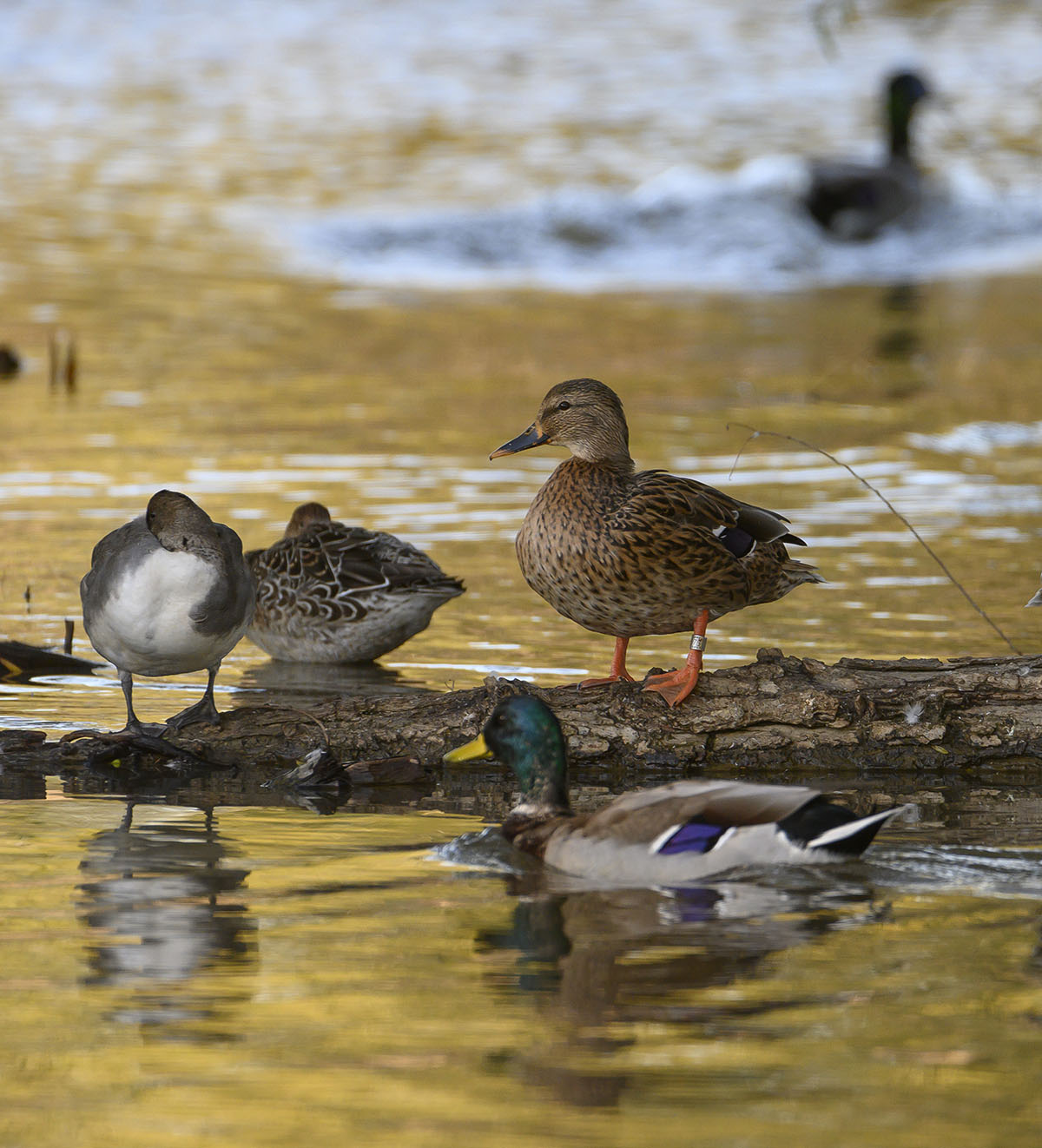 Why So Many Mallards?

Normally we band more mallards than other waterfowl.

In most of the country, the mallards that hunters shoot have migrated from northern breeding grounds, but in California, 60%-70% of the mallards killed by hunters hatched here. Because of that, our mallard regulations work differently, so we need a lot of data on our mallards.

CWA banding crews target mallards in the late spring and summer, banding many that are too young to fly. Partners in our Egg Salvage Program also band most of the mallards they release.

Pintails don’t breed here in great numbers, but it’s a very important species in our state – literally the most abundant species in California during the winter, highly prized by hunters as exceptional table fare.

Pintails are currently under restrictive limits because the species hasn’t rebounded from population declines in the 1970s. However, a growing body of science suggests it isn’t hunting that’s limiting the pintail population; it’s farming practices and habitat changes in Canada. That means there may be no reason to continue limiting harvest as restrictively (click here to learn about CWA's efforts to liberalize pintail limits within the bounds deemed prudent by science).

CWA bands pintails in California immediately before and after duck season to contribute to the body of data about pintail harvest and populations.

ALL THOSE OTHER DUCKS

The next biggest group of ducks sporting CWA bands is wood ducks, which are banded as part of our California Wood Duck Program.

But while we’re in the field, we will band virtually any duck that enters our traps, which means there are a lot of other species out there with “bling” on them. Click here to check out the story of one hybrid we banded and the young hunter who got him. 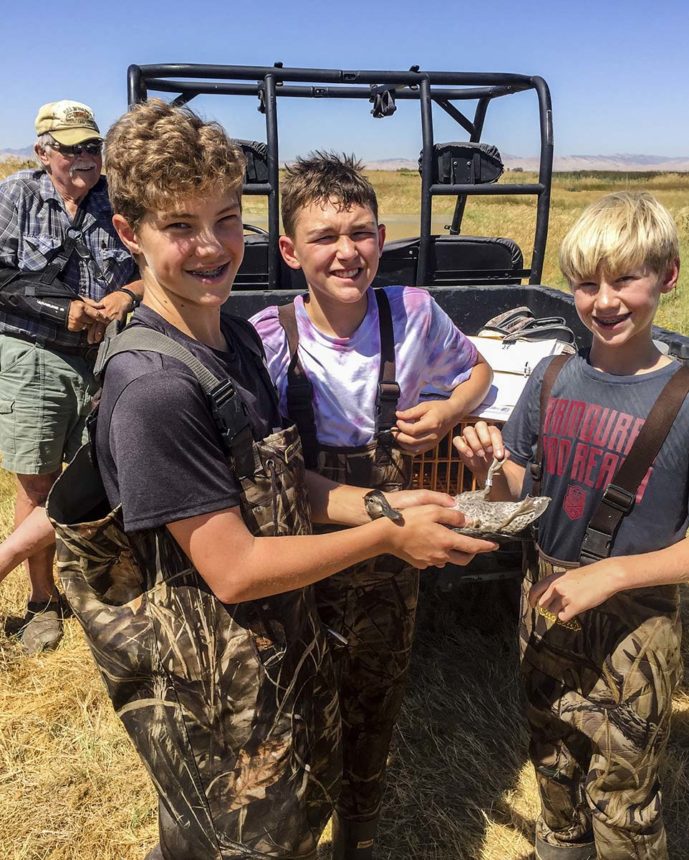 Several times a year, we have days when volunteers can join our biologists and help band birds. Participants learn how birds are trapped, how our biologists assess a bird’s age and what measurements they take to assess body condition, which is a measure of population health and habitat conditions. (Click here to see a video of what it’s like.)

If you’re a hunter who’s gotten a banded duck, it’s a cool way to see what happened the day that bird was banded.

It’s also fun, if you’re a hunter, letting some go after a season of hunting them, and knowing you’re contributing to the science that makes sustainable hunting possible.

Are you ready to help band ducks?